I was doing some tidying up recently and came across this book in my trays before my review books became a way of life. With a name like ‘Year 2018!’ and we are living in 2018, it seems suitably apt to read this book by James Blish this year. I should point out that book was actually written in 1957 and 61 years seemed a lifetime back then. It still is come to that. 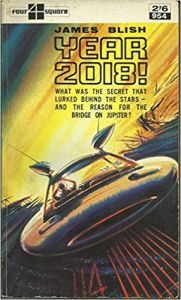 In many respects, this book isn’t a prophesy of where we should be like now. The nearest thing is Blish pointing out that we’d be having problems with resistance to antibiotics and another planet discovered on the fringes of the Solar system.

What is concentrated on is a giant bridge being built on Jupiter. No, Blish hasn’t discounted the gaseous nature of Jupiter and it is remotes from one of the planet’s moons, where the engineering team work at a distance. There have been other such projects been attempted on some of the other outer planets as well. Blish puts in a lot of science along the way although you’re left guessing as to why such expensive projects are being built, although you do see a lot of political shenanigans along the way.

As it gets towards the end, there is mention of the discovery of how they’ve resolved the means to prevent death and thus granting immortality and then the mention of the knowledge learnt from these bridges to the creation of the Dillon-Wagoner gravity polarity generator commonly called spindizzies then you know you have the origin tale of Blish’s four volume ‘Cities In Flight’ books, which I’ve mentioned at SFC from time to time. It is kind of given away in the timeline at the back of the book anyway.

What is odd is looking around the likes of Wikipedia with Blish connections and finding there is no reference to this book, let alone its connection to the Okie books, although there are copies still out there.

‘Year 2018!’ was written at a time when short books were frequent so there’s a lot of information condensed into a short page count. You really do have to think beyond what is said to what is going on. Although this isn’t our 2018, it is an important book in the Jim Blish cannon that you might have missed if you are a fan of his books.