Author Michael Smith reveals in his introduction to his book, ‘WWII: Codebreakers And Spies’, that its only now with public release of classified information that we’re getting a clearer picture of what went on in this area of espionage during World War II. What makes this book of special importance is you have copies of actual documentation to peruse as well. I think the biggest discovery was how involved Ian Fleming was compared to what he said in his own life-time, although it doesn’t resolve his inaccuracies in his ‘James Bond’ novels. 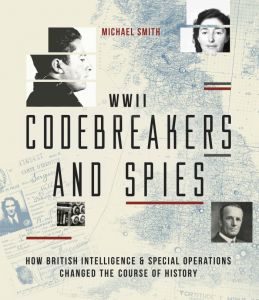 There is obviously more emphasis on MI5 and MI6, with a mention on MI9, who monitored prisoners for information, before moving onto the likes of Bletchley Park. There are some reveals that I didn’t know about before. It bursts the myth that Churchill knew about the Nazi bombing of Coventry and couldn’t do anything about it without revealing they had cracked the German Enigma codes.

However, this code was using the Luftwaffe Brown Enigma Cipher and it took much longer to break it. What becomes abundantly clear is knowing what the Nazis were planning to do gave our forces an edge on the battlefield and at sea where they stopped the U-Boat wolfpacks attacking cargo convoys.

There is also an emphasis on female spies and code-breakers showing just how brave they were when so many were caught, tortured and executed. Special attention should be given to magician Jasper Maskelyne who devised much of the concealed equipment RAF officers carried when marooned and escaping from Germany. In some respects, I wish there was more about Maskelyne’s work because it covers more than this equipment although I suspect the Magic Circle might object.

This book touches on things away from espionage, touching base with the military in all fields of war, including in the east with Japan. Even the Cockleshell heroes get a mention. The most obvious thing that you will walk away from this book with is that having intelligence about the enemy is crucial to winning and why it still continues today.

Although I’m familiar with much of this book already, it does clear up a lot of misty thinking and with actual documentation making this a worthwhile book to add to your collection if you have a taste for real-life espionage.

Being critical, I do have to wonder at the choices of some of the colour backgrounds of some of the text pages. The text is about readable but the italics with photographs less so.

I hope there can be a follow-up to the Cold War as there is a hint of this as World War II ended.