‘The Fifth Season’ tells the story of a world very different from our own with a single giant continent that is regularly broken apart and put back together. This instability has shaped a very harsh society with each individual defined by the skills they can bring to a community. The useful survive a fifth season. Those that are a burden are cast out into the chaos to live or die alone.

With society so driven on the single mission of survival, there is little thought left for why and how things may have come to be this way. This fifth season is different and one man has called up the power of the Earth to strike down his enemies. All of his enemies. 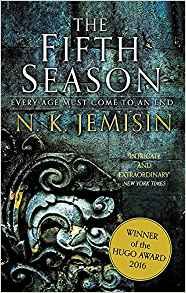 The book follows three orogenes, people who can command the Earth’s power. Feared for their abilities, orogenes are either killed by mobs or enslaved by the empire.

Essun has lived her life quietly, concealing her gifts and fighting to keep the gifts of her children hidden from everyone, even their father. Her dreams of a quiet life are dashed the day she returns home to find her son dead by her husband’s hand and her daughter missing. Striking out across the breaking world, Essun races to find her daughter and keep her safe from those who would merely kill her and those that would use her in the name of the greater good.

Damaya didn’t know what she could sense was bad. She hadn’t meant to almost kill that boy when he pushed her. With her power revealed she is sent to the Fulcrum, a place of privileged slavery for the orogenes, where their cursed powers can be trained and used for the good of the empire.

Syenite is a senior apprentice of the Fulcrum with ambitions. Her latest assignment is to bear a child to another orogene to produce more orogenes to serve the empire. She has no option but to comply. But two powerful orogenes travelling alone together catches the attention of things long left forgotten with an agenda all of their own.

N.K. Jemisin’s world-building is epic and well suited to the vastness of geological time. The Earth itself is a character in this story. As each character moves through their own tale, it is the Earth that defines their journey. An Evil Earth that works against humanity, even as it works against itself, breaking apart and spewing lava and gas across the surface. The world and the novel are built in a beautiful series of layers bound together like volcanic stratum.

The tone can be somewhat disorientating with multiple viewpoints, one of which is in the seldom seen second person (you rather than I or she) which does not lend the book well to a casual or likely-to-be-interrupted read. But focus is rewarded. The characters feel real and the setting scarily possible. The brutal decisions people make begin to seem reasonable. Jemisin blends the stories of the characters into a wonderful whole against the story of world, artfully balancing the brief time of an individual against the slow spin of the planet beneath their feet.

This book demands your attention. You’ll stay up for just one more chapter and then, maybe, just one more. Each thread is drawn together until you’re suddenly at the end and you’ll need to go and find the next book. This book is new and different which is part of why I really enjoyed it. ‘The Fifth Season’ does not remind me of any other book. I cannot say if you liked Tolkien or Le Guin, you’ll like this. The series has won fantasy awards. It’s won Science Fiction awards. It’s post-apocalyptic. It’s all of the above and highly recommended. 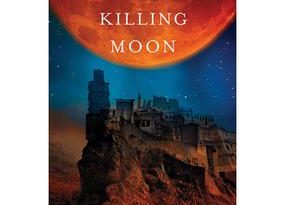 The Killing Moon (Book One of the Dreamblood) by N.K. Jemisin

The Killing Moon (Book One of the Dreamblood) by N.K. Jemisin