The ‘Three Body’ trilogy was an epic tale of alien invasion, stunning large-concept feats of engineering, long-scale social development and tragic tales of the individuals caught up in events beyond their control. It was a cult phenomenon in China when first published and, like many popular books, spawned its own fan fiction.

The best known of these works was by Baoshu and what eventually became the novel ‘The Redemption Of Time’ gained the blessing of ‘Three Body’ author Cixin Liu. It did much to salve desperate fans’ need for further adventures in the Three Body universe. 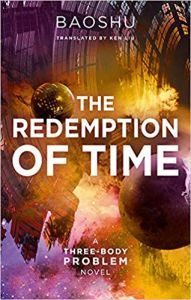 Described as a ‘paraquel’, this books parallels and intertwines its story with the original ‘Three Body’ trilogy, following the character Yun Tianming. It cleverly weaves its narrative through the familiar history of the earlier books before taking off in another grand direction. To be clear, if you haven’t read the ‘Three Body’ trilogy, this book will make little sense to you.

It’s designed for fans of Cixin Liu’s works, and this is quickly obvious by the way it constantly refers to things that happened in the other three books and makes no attempt at any introductions or explanations. Although I read and enjoyed those books, three years later, I struggled to put all the references together and remember who all the characters were that Baoshu refers to. I suspect this book would be more rewarding if read soon after completing the ‘Three Body’ trilogy.

Around half of the book takes place several centuries into the future and consists of Yun Tianming’s conversations with his fellow castaway and replacement love interest, AA. Through his recollections and retelling of various myths and legends, he gives his own account of things that were only referred to by Cixin Liu: his capture by the Trisolarans, his betrayal of mankind and his unseen involvement in several other incidents in the books.

This whole section has the feel of an explanation or a report and does not have the immediacy of a narrative of events as they happen. There’s lots of fascinating stuff and clever ways that Baoshu uses his own version of events to explain episodes of the trilogy in new ways.

Eventually, Yun Tianming departs on a mission of his own, leaving the history of the ‘Three Body’ trilogy behind to forge a new story on an equally grand scale. Baoshu continues with the epic, cosmological scale of Cixin Liu’s creation and similarly mixes in a dose of philosophy and internal storytelling. Locations larger than galaxies and timescales as long as the universe are the setting for this latter half, but further references to Cixin Liu’s work are intertwined along the way.

The whole book is written in a somewhat formal style. This stems from the fact that the first half is being told in retrospect, so is imbued with the tones of Yun Tianming rather than the immediacy of what happens in those accounts. The second half of the book revolves around creatures and beings that are totally alien to us or are so unfathomably powerful that it is difficult to relate to their epoch-spanning, universe-girdling lives.

It’s an epic tale, circling around eventually to tie in with the original source material. For fans of the ‘Three Body’ trilogy, it’s a fascinating addition to the story. 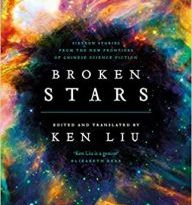 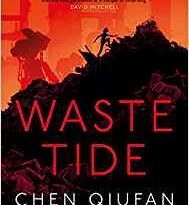