I haven’t seen the film ‘Being John Malkovich’ (1999) for some time. In fact, as I recall, I only saw it originally because I was interested in seeing what else John Cusack was in having enjoyed ‘The Grifters’ (1990) and didn’t even know who John Malkovich was at the time. How times have changed in the past 20 years. Oh, it’s also the debut film of director Spike Jonze from a first script by Charlie Kaufman. A ground-breaking period.

OK, street puppeteer Craig Schwartz (actor John Cusack) can’t make a living from his profession and his pet-loving wife, Lotte (actress Cameron Diaz), and gets a job as a filing clerk to make ends meet. He arrives at the building and LesterCorp and finds he needs help getting onto the 7½ floor with a crowbar from the lady in the lift to the floor which has a low 5ft high ceiling and finds the staff crazy. If you can’t keep a straight face with this surreal world, then you’ll realise that what Schwartz wouldn’t work without it.

Integrating himself with other staff members gets weird results. Continuing with his filing, one file drops behind the cabinet into a gap in the wall. He opens the door there and following it is suddenly looking out the eyes of someone else, actor John Malkovich (same actor). Well, only for 15 minutes before he is dropped out, literally, at the New Jersey Turnpike and soaking wet from a dunk in the stream. His immediate superior, Maxine Lund (actress Catherine Keener), whom Schwartz has the hots for, doesn’t believe what happens when he tells her but changes her mind later, seeing it as a moneyspinner. Got $200? Join the queue. Before that, though, he tells his wife, who clearly wants a go. Odd, really, no one questions whether it’s possible or not.

Lotte is clearly enthralled by the experience and when she and Schwartz dine at his boss, Lester (actor Orson Bean), she discovers he knows Malkovich. Lotte also thinks she ought to be a transsexual after her experience. On her second ‘visit’, Maxine rings Malkovich and tries to arrange a dinner date which he compiles with by Lotte’s compulsion. Do you really want me to explain about the odd square triangle that evolves but only for 15 minutes at a time?

For the record, Malkovich thinks he’s going crazy although finds himself in disguise answering the advert himself and isn’t very happy but wants to do it as well and literally gets inside himself. Totally surreal. I’ll have a Malkovich.

Not liking his wife’s affection for Maxine, Schwartz locks her up and takes her place in Malkovich for the sexual experience and finds he can manipulate the actor…a little and develops it better with each visit and can beat the 15 minute period until he takes over completely. Even Maxine gets to like him that way.

The escaped Lotte goes and sees Lester and learns the secret of the portals and the body vessels but that’s spoiler. From here on, you need to enter the portal. Kneeling room only and always look forward.

As genre fans, we quickly accept alternative realities but the surreality of this one is even crazy by our standards and you shouldn’t examine the logic too deeply. In that respect, the film would quickly fall apart and it is supposed to be funny than analysed. The ending gets ever more surreal and you aren’t supposed to question how all this takes place. Oddly, Maxine is the only one who appears not to get inside John Malkovich in the traditional way. Oh, Malcovich has never starred in a film as a jewel thief. 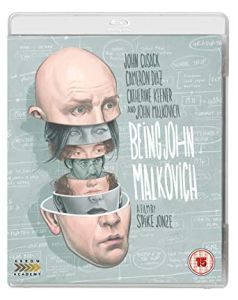 The first extra is a Selected Scene Commentary by French director Michael Gondry recorded in 2012, which is surreal in itself, as he is both a friend and rival of Spike Jonze for about an hour spread through the scenes. Spike Jonze joins in towards the end. Daniel Radford (1957-1999) was their visual effects director who died during the making of the film.

‘Illusion Of Life’ is a 27 minute look of the puppetry by Phil Huber who contributed to the film at the beginning before it started before his own schedule got in the way and was called back after principle filming before Jonze wasn’t happy with the puppetry that was filmed. As did the puppet makers, Lee Armstrong and Kamila Portuges, who had to get all their work done in less than two months. This is a fascinating documentary.

‘John Malkovich On being John Malkovich’ is John Malkovich being interviewed by John Hodgson (who surely should have changed his name for this interview) in 2012 is another 27 minute piece covers how he was given the script and it wasn’t until he was 40 pages in that he found himself. Originally, Malkovich wanted to produce and direct the film but with another actor being used in the role but writer Charlie Kaufman didn’t want to do that. When it eventually came back to him, Malkovich found the cruellest jokes against him had been removed but insisted they go back in because he also thought they were the funniest. My observation on that is the American mindset about not wanting to upset people was still there back in 1998 and them getting the wrong end of the stick as to why he didn’t want to do it in the first place.

‘Spike’s Photos’ is a quarter of an hour conversation with director Spike Jonze as he goes over his large photo album from the film. I think the most telling thing was that Charlie Kaufman didn’t expect his script to be made and had done it purely on spec to get other work. For all you apprentice scriptwriters out there, that has to be a lesson in always do your best work. Once completed, the film took 9 months to edit so never think things are cut and dry.

‘The 7½ Floor’ and ‘John Horatio Malkovich: Dance Of Despair And Disillusionment’ are the unadulterated pieces from the film without other members of the cast observing them. You do have to wonder why business buildings don’t have a 7½ floor. It should be as compulsory as not having a 13th floor.

‘An Interview With Spike Jonze’ from 1998 runs at 2½ minutes as he is interviewed driving in his car. The shortness is down to the fact that after saying the filming took 48 days, you could see his skin turn and he got violently sick outside the car.

‘An Intimate Portrait Of The Art Of Puppeteering’ running at 7 minutes, has Phil Huber at the Magic Castle showing some of his performances and some discussion afterwards. Each marionette takes about 300 hours to build. As a lot of us British know, it’s very hard to walk a marionette convincingly. I think the way Huber does it is because he has shorter strings. Oh, a quick plug for the Puppeteers Of America Inc. if you want to join the profession.

For the life of me, I’m not sure what to make of the 6½ minutes of ‘An Intimate Portrait Of The Art Of Background Driving’ but ‘Don’t Enter Here, There Is Nothing Here’ is not an easter egg, there is only a return button command.

As with all extras, I make a note of the times and the ‘Photo Gallery’ really is 44 minutes long on automatic so you can’t choose the speed you want to watch the stills.

As John Malkovich pointed out in his interview, it would be difficult in the Internet age to do a film like this anymore because it’s a lot easier to access people, thus making this a unique and very funny film. Both Cusack and Diaz are literally dirtied down for their roles so it’s all about performance. If you’ve never seen ‘Being John Malkovich’ then you’re in for an unusual treat and remember this is all pre-extensive CGI and Internt so I’ll still puzzling on how one scene with the multiple Malkovitchs was filmed.

The final product comes with a book which I haven’t seen. For me, right now, I need to find a 7½ floor and see who I can step into. Be careful. It might be you. I hate long falls so might stay and watch.