Writers who are starting to learn their trade are often told to write about what they know.

It was always difficult to know if some of David Gemmell’s tales of his childhood were accurate or exaggerated. Regardless, his stepfather and thus Gemmell had knowledge of the criminal side of the community. Gemmell puts this to good use in this novel. 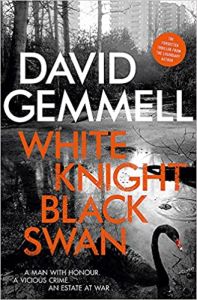 ‘White Knight, Black Swan’ was originally published in 1993 under the name of Ross Harding and focuses on the blurred edges of the underworld. The main character is Bimbo Jardine. He is a collector for Reardon, a local gangster. His job is to make sure the protection money is paid on time. He would prefer not to use violence but will if necessary. He also has a sense of justice.

Bimbo has been in prison. He feels a sense of loyalty to his two cell mates. He has kept in touch with Adrian, a gay man who runs a successful massage parlour. He has become friends with an elderly Jew who owns an antique shop and who is teaching Bimbo, with limited success, to play chess. Attracted by a poster of Winnie the Pooh, Bimbo steps into a video shop a few doors along from the antique shop and finds it owned by his other cellmate, Stan.

Though not good-looking, he has the appearance of the bruiser he can be, Bimbo has the facility of making people, particularly women and children, trust him. Esther lives in the flat opposite his, he once saved her life when she ODed, Sherry is an old classmate who he helped out when her marriage went bad. In the park where he meets Sherry and her children is a lone black swan. Bimbo wants to find her a mate.

Bimbo ambles through life until some thugs put pressure on Adrian for protection money. Thinking they are trying to muscle in on Reardon’s patch, Bimbo takes it on himself to teach them that Adrian is off limits. Unfortunately, Reardon knows all about them and bimbo finds himself the target of a persecution. He finds he has more friends than he expected.

All the characters in this novel live on the edge of society or are very familiar with it. This was Gemmell’s first published book and although it didn’t have the success of his later fantasy it is possible to see some of his later characters such as Jon Shannow and Druss in embryo. Bimbo is not a young man but he keeps himself fit. He cares about those worse off than himself, willing to put himself out for the innocent but having no sympathy for the intentionally cruel.

The book itself is an enjoyable read and an insight into the criminal underworld.