The second issue of ‘Visions’ magazine landed on the doormat with a solid thud: a chunky, serious-looking magazine of 256 pages in red, black and white with monochrome illustrations, innovative fonts and unconventional layout.

I had been very impressed with the first single-themed issue when it came out earlier in the year, so I was intrigued to see what this second volume would bring under the title ‘Visions Of Humanity’. 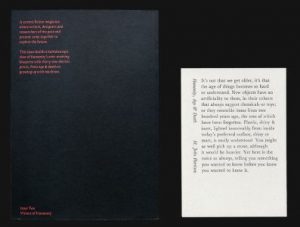 The issue starts with the tantalising and evocative ‘Immunity’ by Kyle Mallone. It’s the story of a team of scientists not only shrunk to miniature scale a’la ‘Fantastic Voyage’ but also sent back in time to infest prehistoric man in an attempt to investigate the origins of the immune system. It’s full of brief but wonderful character descriptions and made a fabulous start to the magazine.

‘Medicine And The Quest For Immortality’ is an insightful essay by Michel Raymond in which he explores the contribution modern medicine has made to our increase in lifespan. There are lots of points I had not considered that made this a fascinating background to several of the articles and stories that followed.

The classic story ‘Caliban’ by Robert Silverberg is told from the viewpoint of an ugly, imperfect 20th-century man who finds himself a century and a half in the future where long-lived humans have adopted identical, perfect bodies. An intriguing story by itself, it gains extra dimensions when considered in light of the essays either side of it.

Raquel Hollman’s essay ‘Hyperbeauty’ follows on from the themes of that story by considering the social forces that define what beauty is and how people are affected by the pressure to conform. It also delves into subjects that I had never considered, such as ethnic plastic surgery and racial ambiguity.

Taking a bizarre turn, ‘Portrait Of The Artist As A Young Man-Dog-Piano’ by Simon Read gives us snapshots of the life of the eponymous artist, interspersed with commentary on his tragic life. It’s a thoughtful and surreal reflection on how people are defined by their differences to the norm.

Following the unexplained abduction of everyone’s skeletons, the narrator lists ‘A Few Things I Miss About Skeletons’ in Tom Offland’s entertaining tale. The list is sprinkled among the story that doesn’t really explain what happens, but which considers how much our identity as humans depends on our skeletal structure.

Scheherazade gets a mathematical retelling in ‘1001 Time-Equivalent Units’ by PH Lee. This fabulous story not only retells the ‘1001 Nights’ in terms of mathematical concepts but also mocks the traditional narrative structure that more often than not puts female characters in powerless roles.

Karel Čapek, the author who is credited with coining the word ‘robot’, also wrote ‘The Punishment Of Prometheus’, in which the fate of Prometheus is decided in a round-table discussion of his ‘crime’ of discovering fire. They’re chiefly concerned whether such an innovation can be trusted in the hands of humans rather than being reserved for the gods.

Amy Papaelias discusses fonts and typefaces in ‘Express Yourself’, an essay which at first I couldn’t see being relevant to the magazine’s theme. The author’s enthusiastic treatment of the subject examined how personality and emotion are expressed in modern electronic written communication. It’s a fascinating way to look at humanity.

‘Group B’ is Austin Wilkes’ tale of how an alien intervention gives mankind the chance to apologise for the loss of species and habitat. Tasked with composing an apology to the buffalo, one woman finds herself at a loss for words. It’s a brief but poignant story.

With a magical and mysterious air, ‘Ivory-Billed Woodpeckers’ by Gary Every tells of the enigmatic appearance of the extinct eponymous woodpeckers. Although a very brief story, it weaves some fascinating concepts together that again question man’s stewardship of the planet.

‘Where Is The Machine’ is a song by Jeffrey Lewis that questions why machines can do just about anything but feel emotions. Just as when I come across poetry, I’m not really sure how to fully assess it.

BBC R&D researchers Libby Miller and Emma Young discuss smart speakers, robot interfaces and electronic communication in their essay ‘Meetings With Emotional Machines’. Just as with Amy Papaelias, they are enthusiastic and captivating in their efforts to advance the understanding of how humans can interact with the artificial.

‘An Assignment’ is a wonderful story by Julia Specht which takes the common trope of artificial humans in servitude and explores one tutor’s interaction with her assigned family. The different family members take to her with varying amounts of acceptance and scepticism as she learns as much about her own identity as she does about humanity.

In his essay ‘The Teddy’, Don Norman postulates the existence of a personal assistant that would be adopted when young, likely in the form of a teddy bear, that would stay with each person for life, acting as a recording and communicating device and as a source of information. It’s a trope that has been used in several SF novels and stories and, as I read through it, I started to think that it was a little behind the times.

When I checked, it was first published in 1992, which suddenly made it seem remarkable prescient, foreseeing as it did the advent of mobile phones that people now depend on for their lives. The article goes on to propose yet more possible developments and speculate in how our reliance on such technology has changed our relationships and our sense of what it means to be human.

‘Tiny Dreams’ is a collection of 6 micro-fiction tales by Pete Majarich, each of only a paragraph. They are so short I can’t say much about them without repeating them verbatim, but they are by turns witty, insightful and thought-provoking.

‘Darwin Among The Machines’ was written in 1863 by Samuel Butler and was, at the time, a satirical look at the development of machines through the lens of Linnaean classification and Darwinian evolution. In the century and a half since, some of that satire seems oddly prophetic and leads us to wonder how man and machine will fair in a future competition where survival of the fittest is the goal.

‘The Oxford Book Of 22nd Century Silicon Poetry’ is a story by David Barber masquerading as a book review. Not only are the quotes from AI poetry very clever, but the review also encapsulates the fictional development of silicon intelligence and makes this a very thoughtful and memorable piece.

Emily Randall discussed the Turing Test, Chinese rooms and other ways of identifying artificial intelligence in their article ‘Conscious Machines’. It’s a great introduction and summary of the subject, considering computers that play Chess and Go and asking what defines consciousness. If we can mimic consciousness, like a Turing-compliant machine, how do we know if we are conscious?

The very brief 1954 story ‘Answer’ by Fredric Brown looks again at the question of super-computers and consciousness in a wryly humorous tale of vast scale and startling consequences.

Throughout the magazine, a series of ten drabbles by M. John Harrison under the title ‘Colonising The Future’ give varied and surprising glimpses of humanity, the future and our place in the world. Individually, they provide an intriguing series of punctuation throughout the volume. Having reached the final instalment, I went back to read them all in a row and although they do not form a series, reading them together adds to their power and also ties the entire magazine together as the themes from numerous other stories and articles are reflected in these gemlike masterpieces.

Finally, we come to the second half of 1930s French post-apocalyptic novel ‘Quinzinzinzany’ by Régis Messac, translated in to English for the first time by Mathieu Triay. Having survived a global environmental disaster and finding himself alone with a group of young children in issue one of the magazine, narrator Gérard Dumaurier has fallen into a state of resignation and lassitude.

He plays little active role in the second half of the novel but observes as the new society develops along strange new lines based on the children’s understanding of the world around them, their limited and corrupted vocabulary and their new modes of interaction. It’s a quirky and fascinating look at what happens when a group of unguided children start to define for themselves what it is to be human.

This second issue of ‘Visions’ fulfilled well the standard and the concept set by issue # 1. The interaction of alternating fiction and non-fiction of varying forms and lengths makes for an eventful read, particularly with the inclusion of stories from several different time periods. The homogenous theme, ‘Visions Of Humanity’ tie all of them together into a pleasing whole and made this a wonderful magazine for the connoisseur of speculative fiction. 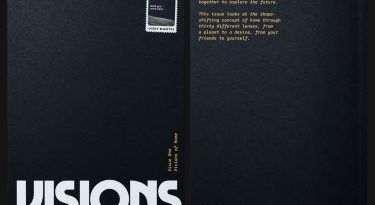