Len Wiseman’s (‘Underworld’) numbing, noisy and nonsensical dazzling ditty ‘Total Recall’ marches through the monotonous motions as surly SF actioner but only manages to muster up inconsequential static. The excess of action-oriented sequences, CGI hedonism, exaggerated fight scenes, curvaceous cuties in a hormonal catfight, a robotic nemesis and a swaggering leading man caught in the cosmic craziness arbitrarily comes with the territory. Still, these familiar flourishes that accompany a SF thriller does not make for automatic formidable filmmaking even in a summertime escapist action flick meant to drown one’s sensory bank.

Of course one realises that Wiseman’s disjointed ‘Total Recall’ is the remake of the Arnold Schwartzenegger-starring, Paul Verhoeven-directed original that actually captured the audience’s imagination with its outlandish impishness. With the Arnie S./Paul V. original their SF adventure was armed with a refreshing outrageousness that invited moviegoers to wink at its over-the-top implausibility. Yesteryear’s ‘Total Recall’ had a biting sense of humour and a biting techno-twitchiness that was thoroughly infectious.

In fact, one even wonders why the pointless presentation of ‘Total Recall’ exists? It only serves as a reminder as to how superior and nostalgically nifty its previous bombastic blueprint was with entertaining sauciness from over two decades ago. Witless and uneventfully wily, ‘Total Recall’ is lapse in its memory mechanism.

In the futuristic 2084, the world is in complete shambles. The survivors have two separate worlds that make up their existences. In the Colony (Australia), the impoverished people reside there where they mainly consist of blue-collar workers relegated to slave-like labour. The other venue, the UFB (United Federation of Britain), is located at the centre core of the Earth. The denizens in the Colony are fed up with the usual status quo and are simmering with cynicism. No doubt that a revolt is in order. Think in terms of today’s Occupy Movement set against sophisticated gadgets and technological gumption.

Resistance fighter Doug Quaid (Farrell) is one of the Colony dwellers living a so-so life with his wife (Kate Beckinsale). Quaid is constantly inundated with sensational dreams featuring in James Bond-mode as he fancies himself a super-spy being hunted down by robot renegades. Quaid’s partner-in-crime is a curvaceous cohort (Jessica Biel) whose spy ingenuity helps them in tricky situations.

When Quaid wants his daredevilish dreams enhanced and more excitable he turns to the outfit Rekall, a company that specialises in spicing up fake memories so that it appears realistic to its participant. Quaid is eager to capitalise on his super-spy fantasies that dare to take him away from his drab lifestyle. Quaid, who is actually a spy in real life, definitely wants to up the volume of his adventurous profession.

Quaid gets more than what he bargained for when armed soldiers invade Rekall. This invasion proves to be drastic as Quaid is sent into a tailspin of conflict and chaos. Soon, Quaid is caught in the middle of a firestorm regarding the Resistance and its determined leaders in the twisted Cohaagen (Bryan Cranston from TV’s ‘Breaking Bad’) and the defensive Matthius (Bill Nighly).

Unfortunately, ‘Total Recall’ comes off as a poor man’s ‘Blade Runner’ in apocalyptic sheen and attitude. The main message, perhaps the political struggle between the classes of the privileged and pitied, is lost in a hyperactive spectacle that feels empty-minded and trivial. Sure, ‘Total Recall’ redeems itself with the occasional thrill-ride tactics involving colourful chase scenes, inventive gadgetry and the choreographed shoot-outs. Nevertheless, the standard and clichéd universe of henchmen and the obligatory one-on-one showdown between Farrell’s twitchy hero and Cranston’s villainous cretin that wants to eradicate the Resistance feels like a rudimentary romp following the predictable dots.

As the harried super-spy in the middle of the havoc, Farrell appears more robotic than the metal menaces he is supposed to be combating. Beckinsale (Mrs. Len Wiseman in real life who undertakes the Sharon Stone role from the first ‘Total Recall’ movie) does not have much to do other than being a punchline for off-kilter wife-induced jokes. Biel looks good in her uniform as she kicks tail but so what? Nighly shows up enough to register his importance but one cannot help but wonder if his Matthias could have been more instrumental in his on-screen rebellion.

In Schwartzenegger’s ‘Total Recall’, he uttered his catchphrase, ‘I’ll be back’. After watching Farrell’s tepid trip through this anaemic boisterous remake one wishes that Arnold would have kept his word. 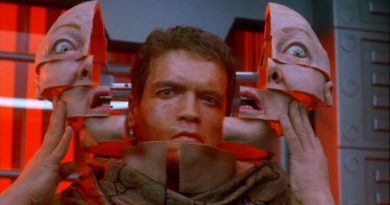 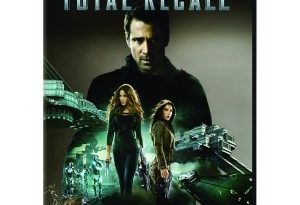 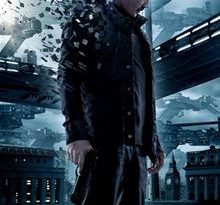