‘Here’s another anthology with a theme and the theme, aptly for our times, is hope. Its inspiration is ‘Hope’, a poem by Emily Dickinson which, like all her poems, can be sung to the tune of ‘The Yellow Rose Of Texas’. There are twenty-four stories so this review is unavoidably bitty. On the bright side, nearly everyone gets a mention. Putting my favourites at the top and leaving the rest in order of appearance, this is what you will read. 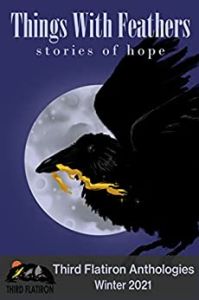 ‘The Best Damned Barbershop In Hell’ by Bruce Arthurs is the best damned story in the anthology. Grimcanker is an underdemon in Hell who, having served his time in the pits, is allowed to open a barbershop for other staff. He’s also permitted two mortals to help out. Tony is a wizard with the clippers who killed his wife’s lover. Lizzie murdered her parents with an axe. The book is worth buying just for this.

‘The Sorcerer’s Appendix’ by Sharon Diane King is also entertaining. Sieur Peyre does magic tricks using sleight of hand following instructions in a book by his friend Jean Prévost. But there is real magic taking place, too, and it’s out of control. Rabbits keep coming out of hats until the countryside is swarming with them. The author is a real-life expert on medieval life.

‘Sophie’s Parisian Stationery & Parfumerie Magnifique’ by Wulf Moon was damn good, too. Machines have killed most humans but one bad guy left, with a shotgun, moseys into Hollywood and attacks the AI run shops and entertainment venues that are still there. All they want is to please customers. An original idea and well-handled.

Those were my top three but to be fair, it’s all good work. Here are the rest.

‘Dream Eater’ by Nemma Wollenfang has a bird in London that eats dreams at night and seeks solid food in the day, though it repels most other creatures by its appearance. A kind girl called Rhoda feeds it. Strange and poetic, it carries you along with the prose.

‘The Soul Of Trees’ by Emily Dauvin is a fantasy with Science Fiction trappings, a translator that enables a human to talk to cats and plants. I couldn’t suspend my disbelief in talking plants but it’s a nice story even so.

In ‘Adventures In The Spiritual Lost-And-Found’ by Paula Hammond, a lady who was in a coma for a year and recovered sees creatures in her peripheral vision that she’s sure will get her someday. Her best friend and some witches may help. A brilliant concept, well translated into story terms.

In ‘Elf Magic’ by Barton Paul Levenson, an elf falls in love with a human but kissing a human will mean he loses his immortality. What a choice! There’s a sort of afterword set in our world to reinforce the point made.

‘Yin-Yang’ by Cayce Osborne is a touching story about a man who rescues wild birds.

‘Shiny Things’ by P.A. Cornell has first-person narration by a magpie about an alien invasion, which is certainly original. A different approach and the story fits in with the theme. Even we humans are not completely hopeless.

In ‘The Black Marble’ by Arthur Carey, an alien walks into Joe’s bar and changes Joe’s mind. I liked it and it fits the hope theme well.

Mathematics is perhaps the core science. In ‘Ephemeralities’ by David Cleden, Caitlin has become obsessed with the Reimann Hypothesis and is straining to understand it. The answer is at the edge of her mind, on the tip of her tongue and perhaps sleep deprivation will get it. She hopes. The hypothesis is worth googling.

In ‘The Ones Who Made the Crossing’ by F.T. Berner the first-person narrator, Sandra, has unused wings, and talons hidden inside her shoes but passes for a human in Rome. The story is about refugees and the uncertainty of employment now but with fantasy trappings. It’s the author’s first published work. She has a way with words.

‘Vanishing Act’ by Raluca Balasa concerns Zora who believes she’s turning invisible. She works at the Toronto General Hospital as a nurse. I’m sure I’ve read another story on this theme. Being invisible may be a big issue in our shouty age of pursuing Internet likes.

‘Stella’ by Melissa Mead is the cute story of a falling star, the kind you wish upon.

‘Yes, Sadly’ by Nicholas Stillman has nearly all the population of Earth voluntarily turned into plants so that they can lead a quiet, contented life. I thought the final twist had been banned by SF editors since about 1940. I’ve seen guidelines that expressly forbid it. But here it is again. Irony?

‘The Wonders Of Yesterday’ by Sharon Brady features a family zoom call to somewhere far away and a talking cat and a feel-good feel.

‘Final Report From The Land Of Red-Headed Children’ by Bonnie McCune has an alien discovering that red-haired humans are especially talented and wonderful. I assume this is meant to be humorous, though Heinlein had a fondness for them, so it might be true. I checked and the author is not now a redhead, though she may have been once. Does a ginger beard count?

‘The Warrior Rides Into Battle, Sword Held High’ by Brian Rappatta is an odd piece about people who get the same bus every day and fate. It was a pleasant read.

‘The Girl Who Built Worlds’ by Alicia Cay is an inspiring story of a little girl who worked hard and got her dream job out in space but then hit a crisis. It continued the feelgood theme but showed so much of the character’s feelings and told so little about what was actually happening that I was a bit confused. Show, don’t tell can be overdone. I even like info-dumps!

‘One Last Thing’ by Danielle Mullen is about a writer going to a cosplay convention where she meets a man who is the image of the detective she created long ago. A pleasing story about the importance of fictional characters to real people.

‘Zeno’s Paradise’ by E.J. Delaney has people near death being uploaded to a quantum computer for their last few minutes so that time is stretched for them to…eternity?

The book winds up with ‘Grins And Gurgles’ a couple of humorous short shorts which did what they had to do. Lastly, there’s an essay, ‘What Hope Might Ask’ by Gerri Leen.

‘Things With Feathers: Stories Of Hope’ is a mixed bag and no doubt other readers will have different favourites. But it’s all well written with happy endings, that’s the theme, and may cheer you up as we go into another Covid Christmas.