The good news is that the savvy apocalypse comedy T’he World’s End’ is armed with the notorious wit from proven collaborators in writer-director Edgar Wright (‘Scott Pilgrim vs. The World’) and actor/writer Simon Pegg and Nick Frost. The trio, known for their so-called ‘Cornetto Trilogy’ that includes the devilishly ditties ‘Shaun Of The Dead’ (2004) and ‘Hot Fuzz’ (2007), now round out the frolicking festivities with the continued off-kilter mayhem in ‘The World’s End’. In almost a decade since the aforementioned ‘Shaun Of The Dead’ wickedly mocked the horror genre with its sharpened Brit-style cheekiness, ‘World’ reminds us that Wright, Pegg and Frost have not lost a step in conveying their conventional sense of twisted outrageousness.

Engagingly riotous, inventive, wacky and seedy, ‘The World’s End’ is a sci-fi laugher that boasts an all-star cast inspired by the entertaining shenanigans that persists in Wright’s hilarious horrorfest. The thought of examining a handful of British beer-guzzling middle-aged misfits from a nostalgic viewpoint as they wallow in angst and adventure somehow redeems ‘The World’s End’ as an unlikely salute to the past where time does not stand still for anybody in a current state of disillusionment. Wright’s ode to arrested male development is indeed comic gold.

The concept of witnessing five aging lump-on-the-log losers hopping from pub to pub as they drown their sorrows in mugs of alcohol as the preferred activity of accomplishment somehow does not translate into what one would call an appetising summertime blockbuster. Nevertheless, ‘World’ is absolutely a hoot because the quirky quintet of unambitious rogues give in willingly to the celebrated mockery of the material. For the audience, the results are instantaneously hysterical. One can never go wrong in following the madcap instincts of Pegg and his comedic cohorts.

In 1990, the band of high school friends led by Gary (Simon Pegg) had dutifully traveled to various drinking joints (known as The Golden Mile crawl) in their hometown of Newton Haven as they were swilling pints of beers left and right. However, Gary and his booze buddies never quite finished their mission to visit all the pubs they intended to patron. Thus, the ultimate pit-stop, The World’s End, has eluded them in their binge drinking ambitions.

Anyhow, the ragged Gary King (still unable to break out of his reckless mindset from his youth days) decides that he needs to round up the whole gang and re-visit the missed opportunities from yesteryear. Gary is not very successful in his present existence, he’s a failure to put it bluntly. His buddies have grown up and are saddled with responsibilities of families and employment, unlike the vulnerable Gary whose loneliness consists of therapy sessions and unrealistic impulses in embracing the glory days when he was in his popular element.

So Gary convinces divorced construction crew chief Steven (Paddy Considine), real estate agent Oliver (Martin Freeman) and married car salesman Peter (Eddie Marsan) to reunite and engage in the ‘good old times’ to spark up their dreary (although more productive than ringleader Gary) present-day lives. As for skeptical lawyer Andrew (Nick Frost), he is not as enthusiastic to relive the fun and frolic times of The Golden Mile crawl, where barstools and pretzels were commonplace. Still, Gary’s constant nudging and nagging prevails as he gets what he wants when Andrew reluctantly climbs aboard with the rest of the rabble rousers.

Naturally, the given theme behind the off-balance theatrics in ‘The World’s End’ is that one can never go home again or can they? The aura of red-eyed drinkers, barroom brawls, disorientation and dismay all add up to the refreshing craziness and cockeyed thrills and surprises that will shock and stimulate moviegoers to no avail. Whereas both ‘Shaun Of The Dead’ and ‘Hot Fuzz’ keenly spoofed Hollywood zombies and the absurdity of action flicks, ‘World’ feels liberated to drift into territories that are not as defined or developed. Perhaps drifting male-bonding and excessive alcohol consumption is Wright’s self-prescribed horror show? The movie does make allowances for referencing other film influences that range from the supernatural to the supercilious.

As the world collapses around them in madness and despair, Gary and the group get lost in the nonsensical pursuit of their pub crawl. If finishing this agenda means something as ominous as their self-imposed destruction then hey…maybe this misguided and mind-boggling foray into the realm of being soused in escaping certain realities may be the stinging wake-up call needed?

Pegg is spot on as the lead louse while overseeing the chaotic proceedings. Pegg’s Gary is an insufferable man-child, a matured fortysomething poster boy for indifference and intolerance. Still, we root for Gary and his bawdy bunch because they get us connected to the disjointed mayhem that feels so delightfully surreal and sardonic. Edgy, raunchy and rip-roaring, ‘The World’s End’ is festive and blisteringly giddy. As the sole feminine eye candy tossed into the mix, Rosamund Pike delivers a spicy turn as she serves as the curvaceous catalyst among these marathon boozehounds.

Sure, the twists and surprises are in your face and to reveal the intricacies of the movie’s foundation would be an injustice to a certain extent. The film’s title should tip you off as to the screwy roller-coaster ride that is not only in store for Gary and his fellow guzzle geezers but the surrounding world around them falling apart at the seams. Weirdly, that should plant a chuckle on anyone’s face falling victim to the mischievous motto of the Wright-Pegg-Frost tainted lunacy.

The World’s End… Invasion of the Beery Snatchers. 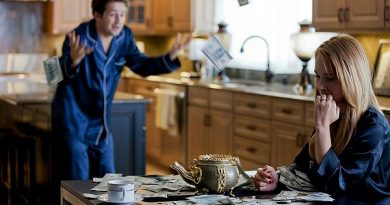 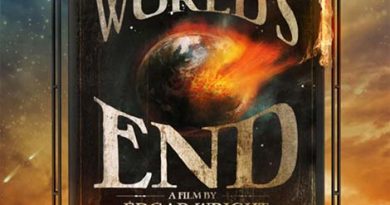 The World’s End… Invasion of the Beery Snatchers.