I wonder if booksellers will try to use the big bar code on the cover of Rob Hart’s book, ‘The Warehouse’? It is the same bar-code so watch what they do. 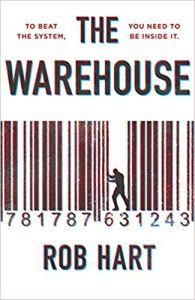 It quickly becomes apparent that the warehouse city called Cloud uses the Amazon warehouse tactics of employment. We follow two new recruits. Zinnia, who wears a red shirt and belongs inside the warehouse collecting items to be sold and her own agenda. Paxton, an ex-prison guard and inventor who needs work and is a security guard and blue-shirted. His background makes him useful to watch people for a non-addictive drug called Oblivion. All the people wear robotic watches that allow access to their apartments and so forth and monitor where they are. The two of them develop a quasi-friendship and love affair, simply because they were recruited at the same time. Maybe. Y’see, Zinnia has her own agenda of finding out some secrets, which isn’t made that clear what, about Cloud and then handed a final job, to assassinate its founder, Gibson Wells, who is there for a visit.

The build-up and character interplay, rotating between the pair of them is nicely done and would probably work in any genre. The real problem comes towards the end where author Rob Hart tries to pack in too much. I’m not even sure his ideas for burgers would work, purely from a nutrients point of view. In comparison, ‘Soylent Green’ is actually a lot healthier, which is saying something.

I got the impression that author Rob Hart realised he was getting close to his page count and needed to finish the book, hence it looks so rushed. Considering Zinnia is supposed to be a skilled assassin, she ends up acting like an amateur without any secondary plans to carry out her hit. Although there is an unexpected twist in the interrogation, a little more thought with exploring the options available could have made for a better book. Although I’m not totally disappointed and Hart shows promise, he needs to work on his end game.