Sometimes you can learn more about a book by its sub-title. With Robert Bly’s book, ‘The Science In Science Fiction’, its ‘83 SF Predictions That Became Scientific Reality’. It also had James Gunn as consulting editor although not explaining just how much he contributed. As I already have a database in firsts in Science Fiction and particular ones I would use as my litmus test, the obvious one being Van Vogt’s ‘World Of Null-A’ being the first in several entries, although only missed out here in one instance is the terraforming of Venus, although the name for it hadn’t reached him at the time of his writing although we’ve yet to do anything that significant.

According to this book, Jack Williamson invented the word for his ‘Seetee Ship’ story in 1942. Although if you want to throw a bug in the works, ‘First And Last Men’ (1930) by Olaf Stapleton predates him. A tricky thing placing who named or created what first. 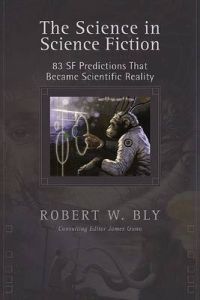 For each entry, you get information about the SF subject and then some history and state-of-the-art in reality. If you pull this book, be sure to keep a notepad ready to notebooks that you will think you will want to read later on because there’s likely to be a lot of them. It’s also very interesting that they think a book is the first one, they use ‘seem’ or ‘think’ or ‘probably’ to hedge their bets.

With all such books and if you’re geeky enough, you’ll be looking to expand your knowledge and query things when you’re less sure. Take androids, would you regard Commander Data from ‘Star Trek-The Next Generation’ as the most famous one or would you be looking at Ash or Bishop from the ‘Aliens’ franchise because they pose as humans better? I’m less inclined to include the Golem since as a clay artifact, it belongs more to fantasy than Science Fiction, then we have a problem with Adam and Diana Prince who was originally a clay construct of the Amazons. Notice, I’m already thinking beyond the book and showing some of the problems of going too far from SF.

Anti-gravity is more problematic as my source says ‘A Voyage To The Moon’ by Joseph Atterley (George Tucker) predates their choices coming out in 1827, 60 years earlier than their choice. This isn’t being said to catch them out but remember with these early books it’s getting access to them that is always problematic. I’m not going to list all examples, mostly because even I haven’t read them all let alone all the books about SF out there, although I am working on that one.

It’s interesting that the first use of the word ‘cloning’ was in 1903 and didn’t seep into SF until much later. I’m sure had Van Vogt had heard of the word for his 1948 (not 1945 as noted in the book) novel, ‘World Of Null-A’, he would have used it instead of calling Gosseyn’s replacements as ‘extra bodies’.

Cyborgs displayed the books of them out of order and considering comic books do get mentioned elsewhere, I’m surprised Rich Buckler’s ‘Deathlok’ from 1974 as being the first at Marvel. Saying that Frederick Pohl’s ‘Man Plus’ cyborg Roger Torraway was adapted to live on Mars, not connect into and run a spaceship.
I know I’m spending more time on mistakes than what is good with the book but when they happen it does show I’m paying attention. For instance, he puts Ripley in the Power Loader in ‘Alien’ rather than ‘Aliens’, something that should have been picked up at the editing stage.

When it comes to the 1968 TV Series ‘Land Of The Giants’, I think the verdict is still out as to whether the Spinsdrift crew and passengers were shrunk in the magnetic space storm or really did land on a giant planet, mostly because of the Square-Cube Law.

I should point out that there are several things noted that I’ve never been able to attribute before, invariably because I hadn’t considered them individually. Things like holograms and ray guns just become the fabric of the story

Something that has been corrected since the release of this book is that bears don’t actually hibernate but go into a state of torpor.

There is some confusion with the 1989-1993 TV series ‘Quantum Leap’ and why Sam Beckett is seen as different people in different time periods. Considering he became women and a chimpanzee in his travels amongst others, if he was shown purely as them, actor Scott Bakula would only be there at the beginning and end of each episode. It’s the perception of the people from the time periods that sees him differently but he is actually possessing their bodies, although you would think based on this entanglement when they appear in the timer chamber in the future, why don’t they look like Beckett?

With the transmutation of elements, Ely refers to only the villainous Element King although he got the name wrong as its Cosmic King and who could transmute elements with his eyes. It’s the Legionnaire Element Lad who does all the things he notes.

I’m not sure if I agree with Bly that the breathing fluid used in the 1989 film ‘The Abyss’ was fiction, simply by looking it up and seeing the word ‘perfluorocarbon’ (PFC). While we’re speaking of gilled humans, ‘Voyage To The Bottom Of The Sea’ season one 1965 episode ‘The Amphibians’ and the 1971 TV movie, ‘City Beneath The Sea’ also had a gill-man called Aguila.
Bly does an appendix looking at some SF subjects that don’t qualify for the main list. That doesn’t mean he hasn’t forgotten some things. I mean with force fields, ‘Forbidden Planet’s C57D spaceship’s force field stopped the Krell energy life-form for a while. I did like his comment that the US Patent Office will only accept a working model of a perpetual motion machine although you would have to wonder how it could be transported.

Please don’t forget, I’m pointing out things I can expand on as much as correct, there is a lot more that is right, especially on the scientific side. I’m reviewing and part of my remit is looking for mistakes or things missed out. If you can read a book that will challenge your knowledge or you would argue with them in person, then it’s worth every penny and I also learned a lot more along the way.