‘Elric: Stormbringer’ has two heroes: Stormbringer is a magic sword of great power. Elric is a miserable, pasty-faced whiner with a medical condition, dependent on drugs merely to stay alive. The adventures of Michael Moorcock’s famous albino have been issued, re-issued and adapted endlessly since his first appearance in 1961.

These Eisner award-winning stories by P. Craig Russell are surely among the finest examples out there. Originally published by Dark Horse and Topps comics in 1997, here they are bundled together in one luxurious volume with an interesting introduction by the artist. 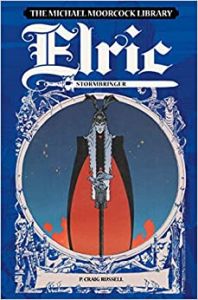 I love Elric and I remember being awestruck by ‘Stormbringer’ when I read it as a teenager. It’s a compelling story and P. Craig Russell brings it marvellously to life. The art is simple but effective, mostly with sparse backgrounds except where the scene demands a panoramic view of Chaos powers. Russell’s figures are reminiscent of Steve Ditko and Gil Kane, lean and elegant.

The faces are often contorted with powerful emotion. The colour palette is muted, that is bright colours but with a matt effect rather than the too brilliant glossy shine of much modern fare. Happily, with the ‘look inside’ facility on some book websites you can take a peek before buying but I loved it.

There’s a lot to read as well. ‘Elric Stormbringer’ isn’t one of those graphic novels you will skim through in an hour. Roy Thomas scripted Russell’s previous adaptations of Elric but Russell did the chores himself for this project, selecting which dialogue and descriptions to include with the art.

As far as I can tell, he did a great job. I have a copy of the original ‘Stormbringer’ to hand and Russell’s chapters align with those of the book. It’s not really a novel. Moorcock didn’t do novels back then but would string three 15,000 word novellas together and make a book. Nine would make a trilogy. The format is usually a quest with the hero in pursuit of some Macguffin.

The opening quest here is to find his wife. As the story begins, Elric is retired and living peacefully in Karlaak by the Weeping Waste, married to Zarozinia, daughter of Lord Voashon. When Chaos demons kidnap her, he must go to war to win her back. His enemy is Jagreen Lern, Theocrat of Pan Tang, an unholy land of warrior wizards trying to emulate Elric’s ancient race of Melnibonéans. Jagreen Lern has made a pact with the Lords of Chaos and is set to assault the Young Kingdoms as a prelude to further conquest that will unleash Chaos over all the world.

Some lowlife rulers have allied themselves with the Theocrat to be on the winning side. Elric, too, has allies. His only remaining kinsman Dyvim Slorm; Queen Yishana of Jharkor; Rackhir of Tanelorn and, of course, his old companion Moonglum. His strongest helper, reluctantly wielded, is Stormbringer, the black sword that sucks in souls as it slays and passes some of the victim’s vitality onto Elric, transforming a weedy albino into a mighty warrior. But the cost. Oh, the cost!

Elric pays dear but you won’t. The book is good value. The eBook isn’t. I’m happy reading ordinary fare on a tablet but it makes no sense that a few bytes of data cost not much less than these beautiful hardcover bound crisp pages you can hold in your hand and gloat over.

Quality material of this sort deserves dead trees and Titan Books have put them to good use in this very nice edition. Recommended.