Considering how popular the 1973 film ‘Enter The Dragon’ is to this day, it’s amazing how few books are available on the subject. When I came across this 1987 book, ‘The Making Of Enter The Dragon’, I hoped I could get a decent copy at a good price in the lockdown and lucked out, even so it was still expensive and you would have to wonder why no publisher has thought to reprint it.

A useful game to play if you’re looking for unusual and rare books as you can pull some bargains. Most importantly, Robert Clouse was also director of the film and you can’t higher up the tree than that. Also, with the passing of John Saxon this year, practically everyone associated with the film is now gone. 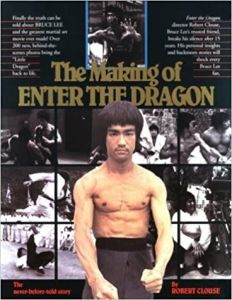 Clouse gives a lot of insight in the preparation in making this film in Hong Kong, the low budget, language difficulties and inadequate equipment, not to mention the cast and working with Bruce Lee, who had a lot of say in every aspect of the film and a few temper tantrums about losing face. In fact, much of the emphasis is on Lee an less on the other members of the cast.

You do learn a lot about Chinese customs from this book. Everything from losing face, positions of power to employing the right people for particular roles. As Chinese actresses wouldn’t play prostitutes so real ones at their proper pay rate had to be hired. You want derelict humans, as with the underground prison, you got them off the docklands.

Of course, the scene order filmed doesn’t match that on screen and you experience a different set of problems, not to mention delays caused by injuries. The boats to the junk and the banquet were filmed towards the end rather than at the beginning.

The biggest selling point is the photographs and about the only things missing are scenes with Bruce Lee with the bo and nunchakus but as Clause points out, Lee was so fast with them they had to film at high speed to get his movements.

Looking at the page count, you would think 200 pages would take a long time to read and there is a lot of text between the photos but Clouse made for a delightful writer, pointing out a lot of details like his wife stepping in as art director using illustration to point out what was needed.

Time to watch the film again methinks. Just be careful with the cobra.