The Last of Us writers/director Craig Mazin (Chernobyl) and video game developer Neil Druckmann discuss how they created this new HBO Original series in this interview with Troy Baker. Troy, Craig, and Neil break down significant situations and overall ideas as they discuss the first episode of the show.

Alberta, Canada was turned upside down as the production for HBO’s “The Last of Us” took over the province from July 2021 to June 2022. The show, based on the popular video game, follows the journey of a smuggler named Joel (played by Pedro Pascal) and a teenage girl named Ellie (played by Bella Ramsey) as they navigate a post-apocalyptic United States.

But it wasn’t just the characters who were facing challenges, as the production faced its fair share of hilarious mishaps. Reports have surfaced of a herd of actual zombies (okay, just a group of cows) wandering onto set during a crucial scene, causing a frenzy among the cast and crew. In another instance, lead actor Pedro Pascal was almost mistaken for a real-life survivor when he was spotted wandering around town wearing his rugged, post-apocalyptic wardrobe.

Adding to the chaos, the Alberta winter proved to be a formidable enemy, with several cast members suffering from frostbite after a particularly grueling outdoor shoot. But despite the challenges, the show’s creators Craig Mazin and Neil Druckmann, along with the cast and crew, were able to overcome the obstacles and bring the highly-anticipated series to life.

“The Last of Us” premiered on January 15, 2023 and has received universal acclaim, with critics praising the performances, writing, and production design. So, if you’re planning a trip to Alberta, be sure to keep an eye out for any lingering post-apocalyptic survivors or wandering herds of cows.

And Here’s Daniel’s episode one recap for us, as a special Brucey bonus.

The Last of Us game gets turned into HBO TV series (news). 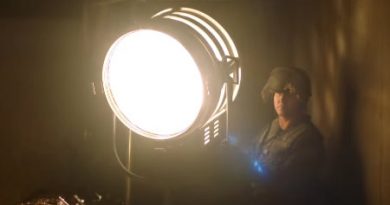 The Last of Us: Pedro Pascal and Bella Ramsey’s chemistry is out of this world (interview: video).