Gotham City is in for a wild ride as the children of Batman and his notorious enemies team up in the upcoming TV series Gotham Knights.

In the wake of Bruce Wayne’s death, his adopted son Turner Hayes (played by Oscar Morgan) forms an unlikely alliance with the offspring of Batman’s foes, including the estranged daughter of Joker (played by Olivia Rose Keegan) and the son of Lincoln March (played by Rahart Adams).

The show, created by James Stoteraux, Natalie Abrams, and Chad Fiveash for The CW, promises to bring laughs and action as the unlikely group works together to clear their parents’ names after they are framed for the murder of Bruce Wayne.

Misha Collins will also join the cast as Harvey Dent, bringing a touch of drama to the already chaotic mix. The show is set to premiere on March 14th, 2023, and fans can expect a strange ride full of unexpected alliances and weird DC hijinks.

Gotham Knights is not to be confused with the video game of the same name which also takes place in a post-Bruce Wayne Gotham and features the Court of Owls as antagonists, but the two projects are unrelated. 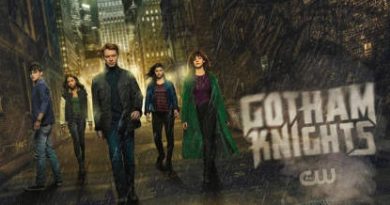