Don’t start reading ‘The History Of Espionage: The Secret World Of Spycraft, Sabotage And Post-Truth Propaganda’ by Ernest Volkman as if it’s going to be a straightforward history of espionage looking at individual secret services. What Volkman has done is taken various strands of interest, like conflicts and wars, and see how it progresses through the centuries and evolved. I was about 2/3 of the way through this book before realising why it wasn’t written in the traditional way, looking at the individual secret services. 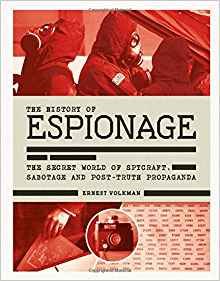 What Volkman has done is showing how various countries responded to the circumstances, often the build-up and wars, to getting intelligence. In those early days, so much of it was propelled by amateur spies who could get things wrong or, worse, having their political leaders ignoring the information altogether. Added to this mix was the reluctance of the older intelligence bosses to acknowledge they needed to change. Sometimes, the diplomacy of not looking at what potential allies might be doing curtailed such activity.

Something that hasn’t changed is that in the art of war, being captured as a spy in wartime is likely to get you executed. However, without intelligence of what the other side is doing, you are at a severe disadvantage, so this one act of war that everyone breaks. Those who dismantled their intelligence gathering machine sorely discovered that to their cost and their armies.

Even more contrary is seeing people like Napoleon Bonaparte who initially relied on intelligence reports and being successful then ignoring it all together to his cost as the British upped their own techniques. Something that becomes apparent from reading this book is that espionage isn’t considered as part of the war apparatus or even as the peace apparatus so you learn not to be too defiant against other countries.

During the course of this book, you will also come across some spies you might not have heard of before, especially from foreign secret services. Rather scarily is the Russian purges of their own spies and how their other spies accepted it as being right. It was a dangerous game even belonging to your own side. I never considered before where the word ‘double-cross’ came from.

M16, using double agents had ‘the XX committee’ in World War Two. Of course, leading up to modern times, we come across terrorism and cyber-espionage and more modern cases that often appear in the news.

There are some common denominators thorough all these cases. Don’t think all spies are perfect at their jobs. As with any job, you get good and bad workers and a lot of it is job experience showing what you have.

Although I wasn’t sure about placing the espionage agencies in terms of campaigns, it does give a better picture of how each country counters each other’s infiltration and whether they learn from it or not. As such, this makes for a very useful book, along with some photographic evidence to show things off. Watch out for dead letterboxes.