Having read Gardner Fox’s biography last month and having two of TwoMorrow Publishing’s Companion books to hand and some time to spare, I thought it about time I read ‘The Flash Companion’. Actually, it should really be called ‘The Flashes Companion’ as it covers four of them: Jay Garrick, Barry Allen, Wally West and Bart Allen. The Jay Garrick Flash also had a teen companion called ‘Red’ Grant for two issues but he fell by the wayside for the more comic antics of The Dimwits, who were modelled on The Three Stooges’.

Next to Superman and Wonder Woman of that time period, the Garrick Flash was the star of three titles although don’t expect his tales to fill the books as there were other character stories there as well, including Hawkman. As such, though, he was only allowed honorary status in the Justice Society Of America so as to allow other characters more space and because he had so much coverage elsewhere. Unlike the next version, the Garrick Flash rarely if any faced any super-speeded villains. 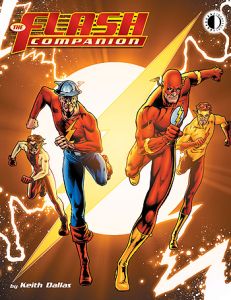 The book is centred around each character, their creators and artists histories and what they contributed more than the history of the character. Whether this was an indictment to the few key events in their lives is more concerning. However, the back of the book will look at the Barry Allen Flash’s rogues gallery so that might be balanced there. There is a sharp reminder that Barry Allen was a tardy person. I wish that was employed more in the stories to explain him rushing to the rescue knowing he could make up for lost time.

The history of the creation of the Barry Allen Flash was something I didn’t know so well nor the fact that he and his rogue’s gallery were created out of designs from an early Carmen Infantino project and he sued DC Comics over it. This new version was created by Bob Kanigher with Infantino art. Kanigher was moved off and John Broome wrote most of the stories. What does make the Flash significant was with his first new version appearance in Showcase # 4 in 1956 was the start of rebooted DC Universe. It also contributed to his death in ‘Infinity Crisis On Infinite Earths’, as he was seen as the one character most meaningful on Earth-1 to show it was for real to be killed.

It’s rather interesting reading that Marv Wolfman didn’t actually include the Flash in the deaths until editorially directed but then did it and even included a loophole to bring him back but no one has ever did it. Yes, it is in this book but you’ll have to buy it to find out. I’m still hoping to find an explanation as to how the air is removed to shrink the Flash zootsuit back into its ring. Carmine Infantino was seen as the most significant artist and even when Ross Andru and Mike Esposito were declared as his successors by him.

It’s interesting to note that Cary Bates wrote 137 issues of ‘The Flash’. In his interview, he points out that even the artists’ children were often older than him which tells an underlying problem at DC Comics back then with creators who could connect with teens.

I’ve yet to see the first ‘Flash’ TV series but the insights from its producers Danny Bilson and Paul De Meo and how they had to explain to the suits about the idealised Central City not being a historic place.

Keith Dallas does get one detail of Infantino’s life wrong on page 103. He didn’t quit being publisher at DC Comics but was fired and I was surprised no one picked him up on this in the editorial office in 2008 when this book was released.

I’m less familiar with Wally West as the Flash as I had stepped away from comics in the 1990s. Saying that, I did hear at the time he was supposed to be portrayed as an everyone character, yet in the first issue he wins the lottery and becomes a millionaire. Although this changed later, it seemed to me renege on the whole idea of him being otherwise ‘normal’. More so, as there are several very rich super-heroes out there already.

I’m even less familiar with Bart Allen aka Impulse but reading here I can understand the powers-that-be wanted to make sure that each super-speed character was different from each other.

The final section is devoted to the second Flash’s Rogues Gallery. With the exception of two, the other dozen were created between 1959-1962. In many respects, they are as famous as Batman’s own villain set, although as Keith Dallas points out, the main difference was they were crooks than insane. Even so, they did murder occasionally and even different people took over their roles as some were killed off.

Although released in 2008, as a historical volume it isn’t likely to age and it will fill you in on all details regarding each Flash. It’s interesting that how many of its writers started off as fans of the Barry Allen Flash before getting an opportunity to write him. I have to confess that although I read his tales, it was more to keep up with all aspects of the DC Universe than him being a particular favourite. In many respects, the Flash was a safe reliable backbone in the DC Universe as, ironically, you always knew where you stood with him. 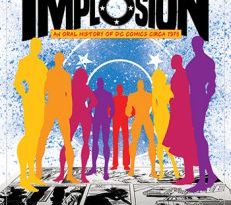