‘The Dead Next Door’ is a low budget American zombie horror movie from 1990. It represents the debut of writer/producer/director J.R. Bookwalter, then aged 19. Twenty-five years later, Bookwalter raised enough money through a crowdfunding exercise to restore the film in 2K and this ‘Collector’s Edition’ is the result, offering new versions of the movie on both DVD and Blu-ray discs along with a number of extra features, some new and some previously released. So does this late twentieth century ‘video nasty’ still have anything interesting to say to a twenty-first century audience? 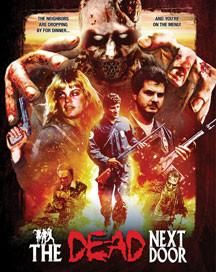 The film opens in the basement of a house in Akron, Ohio, where Dr. Bow, a white-coated scientist, and his teenage daughter Anna, are hiding. Three angry armed men break in, looking for them, but before they can threaten Dr. Bow or Anna, they are eaten by zombies. Over the opening credits, we then see a montage of a zombie outbreak across the local area, the main take home message of which appears to be that although the zombies are dim-witted shambling oafs, they are more than a match for the cretinous residents of Akron.

Post-credits, the action moves south to Virginia and forwards several years. Zombies have now spread across the USA and the only people preventing the total breakdown of American society are the elite ‘zombie squads’, most of whom have supposedly been recruited from the military or the police. One such squad is investigating a zombie attack at an isolated farmhouse. What follows is a fair summary of the rest of the film in miniature.

One of the cops, called Richards (actor Scott Spiegel), enters the farmhouse, goes upstairs on his own, finds a zombie and decapitates it. So far, so good. However, his total lack of spatial awareness leads to him nearly getting eaten by a second zombie that he hadn’t noticed. He blows that one up with a grenade but then, as he fumbles around under the bed, trying to find the gun that he dropped in all the excitement, his fingers get bitten off by the decapitated head of the first zombie. It probably would have been a good idea to look under the bed first. Badly injured and all too aware that it’s just a matter of time before he turns into a zombie himself, Richards magnanimously agrees to stay behind and fight the approaching horde of ravening zombies so that the rest of his squad can escape to safety.

It’s worth mulling over this scene for a moment, as it illustrates everything that’s wrong with the movie. The start of the film has explicitly set up a scenario where we are several years into a countrywide zombie outbreak, yet humanity has not been overrun, the forces of law and order still exist and they have been re-organised into supposedly well-trained ‘zombie squads’. This should, presumably, suggest that the members of these squads will be experienced cops who have been educated about zombies and trained in the best ways to neutralise them effectively whilst minimising the risk to themselves and their colleagues. Such protagonists would surely earn the audience’s respect with their skill and bravery, so that if one of them were to fall in the line of duty, we would genuinely mourn their loss.

Unfortunately, that’s not how Bookwalter chooses to write or film it. Instead, the cops in his script are inept buffoons who show no evidence of any training and who are prone to panicking at the first sign of trouble. If this were a black comedy, along the lines of the Wayans brothers’ ‘Scary Movie’ franchise for example, such an approach might well work. Yet Bookwalter clearly wants the audience to be shocked by the graphic violence and gore, not amused by it. Given this, the total lack of credibility of his protagonists makes it difficult to care what happens to them next, let alone empathise with them. I had lost interest in the film by the end of the second major set piece. Nothing that happened in the remaining hour challenged that judgement.

The rest of the film’s plot, such as it is, consists of these cops heading from Virginia over to Ohio and trying to locate Dr. Bow’s research notes, after their own mad scientist realises that Bow was responsible for the original zombie outbreak and his notes should enable them to develop a serum which will neutralise the zombie virus and kill all the zombies. That almost sounds sensible, but don’t worry. Bookwalter creates several insane sub-plots to ensure continued mayhem, even if nobody really cares any more.

You may have got the impression that I don’t like the film. You’d be right. Perversely, however, I do like the package as a whole. The Blu-ray-sized box comes in an attractive collectible slipcover and there are several hours of special features divided between the DVD and the Blu-ray disc. No matter how bad the final product, I always find it interesting to gain an insight into the film-making process. The ‘DVD extras’ here, which include audio commentaries, production footage, featurettes and picture galleries, provide that behind the scenes information in spades.

If, like me, you expect this to be a serious zombie film, don’t waste your money. It’s difficult to work out whether the script, the acting, the special effects or the audio track is the worst thing about it, as they’re all supremely awful. On the other hand, if you see this as a period piece, a ‘video nasty’ from the heyday of low budget, straight to VHS B-movies which every gore-obsessed teenager wanted to see and a reminder of a bygone age, then you may well decide that it’s worth the dosh, not only to see the film itself in all its silliness but for the many added extras that come with it in this handsome collector’s edition.