‘The Best Of The Victor’ aims to bring you the best of the old British weekly comic ‘The Victor’ and it succeeds pretty well. Alf Tupper, ‘The Tough of the Track’, is here, running tireless miles powered only by bubble and squeak. For non-British readers I should explain that this is leftover cabbage and potato mixed together and fried. ‘Braddock V.C.’ is fighting the Hun and Tarzan look-alike ‘Morgyn The Mighty’ does his jungle thing while ‘Gorgeous Gus’ plays football. World War II and football were the principal interests of any decent, hearty young boy in 60s Britain.

These chaps figure on the cover so clearly, they are the main men. Women did not feature in boys comics in the good old days. Probably this would result in a referral to the Equalities Commission or the Minister for Women and Equalities nowadays followed by a trial and prosecutions all round. Things were simpler then and the girls had their own comics like ‘Bunty’ and so forth. I read a girls strip once called ‘No Tears For Molly’ about a poor servant girl but couldn‘t see the point of it. I expect girls felt the same way about ‘Braddock V.C.’. 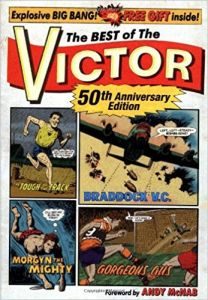 ‘The Victor’ was an anthology, as usual with British comics, a tradition continued to this day in ‘2000AD’ and the ‘Judge Dredd Megazine’. The gripping instalments were mostly 2-4 pages long but there was only a week to wait for the next one. The art isn’t as glitzy as modern comic art but it is competent, anatomy and details of machinery being correctly rendered. Some modern artists seem to lack the basic skills of drawing. Note that only the two-page cover story was in full colour. All the rest were in black and white though some had red tints here and there. This book features several episodes of each character.

The helpful contents page has a long list of the individual parts but very usefully the end of one chapter tells you where to go to see the next bit. ‘Continued on page 71 – Morgyn falls into a hunter’s trap’ it says on page 47. Alternatively, you can read all the first parts and then wait a week and read all the second parts and so on to get the full boyhood effect.

I’ll give you a few examples of the stories.

‘Matt Braddock: VC’ features ‘stories taken from the famous book about him by his navigator, George Bourne’. Braddock is a heroic RAF bomber pilot but his commander, Group Captain Mandeville, is a cowardly scoundrel and useless to boot, organising a flight plan whereby pilots fly straight into the sun and can’t see. Braddock is the kind of cove who’s rude to officers and military policemen but gets away with it because the Commander-in-Chief will always speak on his behalf or even the Prime-Minister.

‘Gorgeous Gus’ is a football story, soccer to you Americans. Gus buys failing Redburn Rovers, purchases several top players for the team and announces that he will be the new centre-forward. He turns up accompanied by his butler and is too much of a gentleman to run. But when the ball lands at his feet, he can shoot so hard he puts the goalie in the back of the net!

‘Morgyn The Mighty’, the strongest man in the world, was living in the Ompopo Valley in the heart of Africa when seven hunters turned up to shoot game. When Morgyn drove the animals away to safety, the hunters decided to shoot him. Morgyn is surprisingly ruthless.

One old favourite of every English schoolchild was ‘The Tough Of The Track.’ Alf Tupper lived in a disused workshop under a railway carriage, works for a scrap merchant and is always falling foul of ‘toffee-noses’ who try to stop him winning races. Alf always wins, powered by bubble and squeak. Tupper was in several comics over forty years and in other incarnations had different jobs.

There are other strips such as ‘Tales Of The Pony Express’ and ‘The Forgotten Fourteenth’ about a lost army platoon in Burma fighting the Japanese. Scattered through this book in no particular order are the cover stories, the only ones in colour, which tell true tales of World War II and also, for the historian, give the price and date of ‘The Victor’ comic that week. The price symbol is ‘d’ which represents old English pennies. Before we went decimal there were twelve of them to a shilling and twenty shillings in a pound. It seems that ‘The Victor’ started out with the big stories of World War II and went for individual heroics later.

‘The Hunt For The Bismarck’ featured in Victor # 8, April 15, 1961, price 4½d. ‘The End Of The Tirpitz’ was in Victor # 16, June 10, 1961, price still 4½d. ‘Stokes VC’ bravely captured Germans in Victor # 212, March 13, 1965, price 5d! These really were true stories of heroism, unlike Braddock who was completely fictional despite the blurb. It’s worth remembering that 1961 was only fifteen years after the war ended and it was still very much in the national consciousness. ‘Two World Wars and One World Cup’ is the famous chant football supporters give visiting Germans. ‘Four World Cups and a budget surplus’ they might reply.

Other features here include ‘Post Bag Parade’ with genuine letters from the original comics. Oddly, these are not comments on the strips but rather little squibs of fact sent in by readers, that Henry Ford made fifteen million Model Ts for example. The sender of each published letter received a ten shilling postal order. There are also text stories of about three pages and even a smattering of adverts for stamps and Corgi model cars. Old men can wallow in nostalgia.

These particular stories were first published in the early 60s, the latest in 1964. I couldn’t read then but I do recall later issues of ‘The Victor’. I liked them but quickly succumbed, alas, to the American cultural imperialism of Marvel Comics. Even so, this collection brought back some fond memories. There are no writer or artist credits so you’ll have to get a book or go on-line to find out who created these splendid pages.

In later years, comics companies co-operated in cross-overs so that Spider-Man and Superman could get together. Imagine if this had happened with ‘The Victor’! Galactus would indubitably have hired Alf Tupper as his herald, to roam the spaceways with cosmic-powered running shoes and seek out living planets on the big guy’s behalf. Alternately, Alf might have persuaded Galactus that all the nutrition any being requires can be found in bubble and squeak, thus saving billions of lives.

I wanted to find out who drew some of these strips. British comic creators were sadly anonymous before ‘2000AD’. www.victorhornetcomics.co.uk/index.html is a useful website for anyone who yearns for boyhood memories and there’s even a site devoted solely to Alf Tupper at www.toughofthetrack.net/ which tells you that he was drawn in ‘The Victor’ by one Peter Sutherland. It seems that publisher D.C. Thompson had a stable of artists working together in one office. Welsh artist Keith Shone seems to have drawn Braddock and maybe some other war strips. The British artists were illustrators rather than cartoonists and the pen and ink drawings hark back to the Victorian pictures from ‘The Strand’ magazine. The stories tended to be two or three pages long so the writers had to pack a lot in so they are wordy by modern standards. Some of these new-fangled comics are all pictures and can be read in two minutes.

‘The Best Of The Victor is a quality, hardcover book and an interesting document for cultural historians. It is suitable for children and might even make a nice birthday present for some elder gentleman who has not become too, too serious under the strain and pressure of real life. I bought it for the recommended retail price of £16.99 back in 2010, on a whim. For a while it cost double that but now seems to be available for about the same. There’s another book called ‘Best Of The Victor’ that shows a charging soldier on the cover. This review is of the one with four panels showing Alf, Morgyn, Gus and Braddock, just to be clear.

I’m off for a sherbet Dib-Dab and a bottle of Corona lemonade now and I’ll still have enough change from my ‘Victor’ ten shilling postal order to go to the cinema and buy fish and chips afterwards. Cheerio!

2 thoughts on “The Best Of The Victor: The Top Boys’ Paper For War, Sport And Adventure! by Andy McNab and Morris Heggie (book review).”