‘The Divided States Of America’ from Nomadic Delirium Press is a kind of shared world in which writers are invited to set a wide variety of stories. It was, I think, dreamed up by Nomadic Delirium editor J Alan Erwine. In the future, the USA has broken up into thirteen states with a lawless territory called the Wastelands in the middle. The different states have different political and economic structures and varying attitudes to borders. Some are open, some firmly closed. Each short story has an introduction describing the Dystopian setting so I won’t go into too much detail here. The stories can be bought in bundles of four direct from the publisher at the website above or individually at all good ebook retailers. 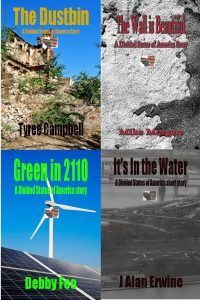 The Wall Is Beautiful by Mike Morgan

‘The Wall Is Beautiful’ is the first story I looked at, though apart from Debbie Feo’s ‘Green In 2110’ story, they don’t need to be read in any particular order. It was a good start. Rick Moreno and Mitch Olaski are with the Texas Border Patrol and drive a big, gas-guzzling truck up and down the Texas Wall. It’s a long vertical expanse of white painted concrete covered in motion sensors, designed to stop drybacks entering the Republic of Texas. They’re drybacks because the water in the Rio Grande has evaporated. The climate is getting hotter and there’s perpetual drought. The background is subtly put over but the best thing about this is the characters. There’s racial tension in Texas and Moreno suffers due to his Mexican heritage. He’s smart and educated, though, while Olaski is a good ol’ dumb redneck. Even so, he’s not a caricature. The plot thickens when the pair are called to investigate a drone that may have crossed the wall in another sector. This story looks at walls from a point of view some supporters of the current President may not have considered. Mike Morgan writes rich, readable prose and I thoroughly enjoyed this.

The Dustbin by Tyree Campbell

Pierce is a trained soldier but he’s fed up with his Dystopian present and just wants to go somewhere quiet and die alone. He’s had his revenge on the fools who got America into this mess, a peculiar and funny revenge that I won’t give away here. Then he comes across a damsel in distress being chased by soldiers. He’s done with the world so that’s not his business. Of course it is! He’s a hero.

Excellent action scenes and a good finish in what’s almost a short story version of Campbell’s novel ‘A Wolf To Guard The Door’. I do think he went a bit overboard with descriptions of the female and perhaps the hero’s rescue would have been nobler if she was a child instead of a red-hot Playboy centrefold, toting a gun yet. On the other hand, I’m glad someone is saying in this peculiar age that men are attracted to beautiful women and that’s not a sin. To sum this up in a felicitous phrase: fast-paced fiction with a ‘Farnham’s Freehold’ philosophical finish.

‘Green In 2110’ is an odd sort of story because it’s very short, unfinished and most of it is taken up with describing the background. The Green States of America comprises what used to be the state of Washington and the former Oregon. Rising tides have provided them with plenty of power and the use of robots for most labour means that people have more time for leisure. Robots are also used to raise and educate the children and we follow the story of Fred as he goes through various nannys and has some interaction with grandparents. When Fred’s all grown-up, he decides he wants to travel and the story ends with him going off to Calivada.

I happen to know that there’s a story in Divided States Of America Bundle # 2 entitled ‘Calivad’a by Debby Feo. Getting the background across is perhaps the most difficult part of writing a good SF story. Feo manages it but perhaps word count limitations, ‘Divided States’ is short stories and prevented her telling this yarn all in one go. So it’s half a story but a good dose of well described future history. Not bad.

It’s In The Water by J Alan Erwine

‘It’s In The Water’ is set in Corprotopia, one of those Divided States, and starts with Richard walking around at night. He’s stopped by a Drone because workers are meant to stay home after dark because ‘a well-rested citizen is always the best for the state’. Three offences in a quarter mean being sent for Rehabilitation, which you really don’t want. Caught, he goes home and remembers Maria, who wanted to rebel. Richard thought it was futile. A good story about the little man kicking against the evil big corporation that rules the world.

It’s available on Amazon. Irony can be pretty ironic sometimes. Actually, all these stories are available at ebook retailers separately but to buy the bundle and save a few bucks you need to go directly to the publisher’s website at nomadicdeliriumpress.com/blog/product/the-divided-states-of-america-bundle-1/. Doing it that way, ‘The Divided States Of America’ stories can be bought individually as ebooks or you can buy a bundle of four at $ 3.00 direct from the publisher Nomadic Delirium Press at nomadicdeliriumpress.com/blog/product/the-divided-states-of-america-bundle-1/ which obviously saves you a bit of cash. The series has been going a little while and ‘Divided States Of America Bundles # 2 and #3  are also available. I’ll get around to them soon as I rather like it.

(pub: Nomadic Delirium Press. Price: $ 3.00 (US) collected from their website)