The sub-title of Kostas Kampoiurakis’ book, ‘Turning Points’ is ‘How Critical Events Have Driven Human Evolution, Life And Development’ gives a better idea on the subject matter. Essentially, he’s looking at the critical times and events that change our species to where we are today. Before that, he also provides examples that you can try out your own level of thinking. With one of his main examples about the use of wings, my background in General Semantics doesn’t necessary match the noun to a set function but I can see the dilemma that some people might have. Likewise, just because an emerald is green and plants are green, doesn’t mean they are related as it’s just a quality of the substance not a relationship between them. The world would get really crazy if we thought that way. 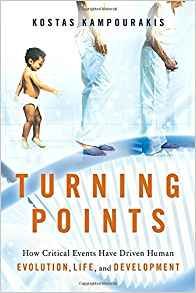 Much of this book dwells on genetics and evolution and the statistics of those who’d rather believe in creationalism than scientific fact. Kampoiurakis points out that although there is some bias for particular countries like the USA on creationalism, world-wide, the balance supports evolution. Even that is damning in itself. What is the other half thinking about?! You would think that an advanced society that is supported so much by technology that there would be a stronger support of biological knowledge with all the evidence it literally has dug up. Although Kampoiurakis doesn’t used carbon-dating as a means to prove the age of our planet and its fossilised life, you do have to wonder on how such religious dogma sticks so much. All kids love dinosaurs and they are far older than the 10,000 year allocation creationists give on the age of the Earth’s life. Beliefs need real evidence and is so often lacking when challenged. Personally, I would keep challenging them to find proof that isn’t in any version of the Bible to back them up.

Kampoiurakis explores genetics in some depth. I’m very much on home territory on this subject and I suspect many of you won’t be. Persevere with this subject because he does cover the points that certain physical traits you inherit from your parents far outweigh any potential mutation.

His thoughts on whether Darwin or someone else would have discovered the principles of evolution centred more on whether he took his voyage on the Beagle. When you consider that Alfred Wallace wasn’t that far behind with his proposal on evolution, I tend to look at is as being only a matter of time than any particular person. Darwin just holds the distinction of being first.

Kampoiurakis makes an interesting point that we have one less chromosome that our chimpanzee cousins but it has actually fused into one and contributed into the division in the primate divisions that led to us. Likewise, his discussion on our bipedal stance shows how different we are from our primate relatives. I would correct him on one detail, female chimpanzees do physically demonstrate when they are in season. Being bipedal would make that posture a bit difficult in humans, not to mention walking upright.

I do wish Kampoiurakis has explored the other species of human than primate comparison more than leave it to the last chapter. When you consider there were at least 20 of sub-sets of human, there would be better comparison there than with the great apes. Granted, we don’t have enough information on all of them but there’s enough on the ones we do have to draw some comparisons. Obviously they weren’t all different enough from each other that they didn’t cross-breed. There’s evidence of the Denisovan genes in the people of the Himalaya as I discovered on a TV programme a couple months back. Certainly, the same could be said of the Neanderthals. Converging and diverging within a species is always going to happen and some will die out but their genes might carry on.

Kampoiurakis produces a lot of validity to evolution and significant points in Man’s own state. You also get a better understanding of genetics that will certainly want you to find out more about how things work. The only thing he can’t cover because we simply don’t have enough knowledge is why some things happen and some don’t although I have covered my own thoughts on the subject in my March article that I drafted before reading this book. Read this book and think. Whether you can get a creationalist convinced otherwise is a tough question.