Easily one of the best books I’ve read this year, ‘The Darwin Elevator’ by Jason M. Hough has style and substance. The characters are vivid and compelling and the plot features more than just another zombie apocalypse. I was hooked by the end of the first page.

It’s the twenty-third century and Darwin is the last viable city on Earth. Thirty years before, aliens known only as The Builders visited the planet and installed a space elevator on the remote peninsula of northern Australia. As scientists and opportunists flocked to the southern continent, the city grew. Then came the plague: SUBS. Those who did not die a quick and painful death devolved, became sub-human with one key emotion heightened, most usually aggression.

The elevator offers protection from the plague, an aura nine miles in circumference, which is not a lot of room for the remnant population. Darwin is overcrowded, food is a commodity. The population is split into two distinct classes; the refugees penned in by the aura and the Orbitals, residents of a series of stations anchored to the space elevator. The Orbitals rely on Darwin for water and air and Darwin relies on the food from the agricultural platforms. Both rely on scavengers: the few, the brave, the foolhardy. Scavengers venture outside the aura in search of parts, batteries, ammunition and, occasionally, the fate of a loved one.

This is where Skyler Luiken and his crew enter the story. They are a crew of scavengers who are bound together by one factor: they are all immune to SUBS. They represent a fraction of a percent of the remaining population. Uniquely equipped to spend days outside the protective aura, they are given many of the more lucrative scavenging contacts. Skyler and his team have to fight the same roving bands of sub-humans at nearly every drop point. Immune or not, they need the protection of the aura as much as anyone else.

But the aura is failing. The power to the elevator is fluctuating, which interferes with the trade of food, air and water and people within the nine mile radius are developing symptoms. The sub-humans are banding together in larger, more ferocious packs, spurring rumours the disease is mutating.

Amidst the chaos, Skyler and his crew are contracted for a very specific mission. Together with brilliant scientist, Tania Sharma, he looks for the information that might stave off the ultimate catastrophe: the collapse of the elevator and the aura. The locations of the data cubes are shrouded in a mystery of a very different sort, however, and as these secrets unravel, so does the delicate balance between the Orbital Council and the militaristic dictator running affairs in Darwin.

There is no rest for the weary. ‘The Darwin Elevator’ is non-stop action from beginning to end. The plot twists are just convoluted enough to change the game without losing the reader and the conclusion to this chapter of the greater story, that of the Builders and the future of Earth, is well worth the several hours this novel holds the reader hostage.

Darwin is well chosen and well represented. Jason Hough has a good feel for writing the rough and ready Australian point of view. The differences between life in orbit and life in the slums of Darwin are realistically rendered without falling too far into cliché. As a debut, ‘The Darwin Elevator’ is outstanding and the quick release of the second two novels in ‘The Dire Earth Cycle’ will ensure the story doesn’t lose momentum. ‘The Darwin Elevato’ is being released almost simultaneously in the UK and the US. The covers are very different and I think they illustrate very well what the respective international audiences look for in a book.

The UK cover is ALL SF and this is a Science Fiction novel through and through. It’s another post-apocalyptic setting, but in a future that can easily sustain the technology required to take advantage of the elevator. There are gadgets and conventions that could only work two hundred years from now. The future is not so far-fetched we cannot relate to it, however.

The US cover is ALL soldier and this is a soldier of fortune novel, definitely. A man on the fringe, obviously talented and uniquely equipped to deal with this situation. Skyler Luiken is the perfect reluctant hero and his nemesis, the military dictator Russell Blackfield, is appropriately dark.

As I remarked earlier, this is one of the best books I’ve read this year. The story grabbed me, definitely. More, the competency of the writing and the keen editing elevated this novel above the rest. It was a joy to read. I look forward to diving into the sequels. 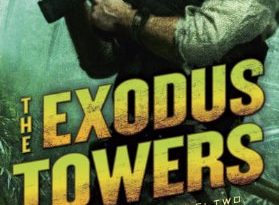 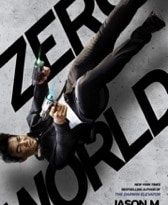 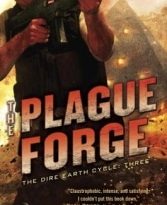