In the third film, ‘Escape From The Planet Of The Apes’, of the original ‘Planet Of The Apes’ series, Doctor Zira, made drunk by Secret Service Intelligence officers under the command of Presidential Scientific Advisor Doctor Otto Hasslein, revealed that she had dissected humans as part of her job in comparative anatomy. As such, in a later court, she was found guilty of a war crime, despite the fact that she came from an alternative future time-line where humans were mute savages. Of the four humans from the past that she was likely to have encountered, she only met Captain George Taylor and Brent, the latter only briefly. There is no information, nor is it likely that she conducted Langdon’s lobotomy or responsible for the death of Dodge and made a museum exhibit. Neither piece of information was known or revealed in court anyway.

The real question is whether Doctor Zira was any different from human scientists in our own reality who conducted experiments on primates, especially chimpanzees, and who have done far worse in their own studies. After all, who would have thought that the great apes would become sentient let alone talk? Would human scientists be condemned in Zira’s future reality? Undoubtedly, but not for any crimes against apes, just for being talking humans. Different rules. Different crimes.

At no point did Zira conduct experiments on talking humans. In fact, she and her husband, Cornelius, were intrigued by Taylor and sought to have his life spared, risking their own reputations in council. Hardly the act of a surgeon without a conscience.

there are always alternatives from: GF Willmetts

If anything, Zira was curious as to the difference between the apes and humans, but apart from being an anatomist, she was also a psychologist studying her test animals. Until Taylor arrived, all she knew was humans were mindless savages.

From their perspective, the apes had no knowledge of there ever been a human civilisation. Indeed, the orang-utan Doctor Zaius is but one in a long line of council leaders who suppressed the history of Earth’s past as ‘Forbidden Knowledge’. To know it is to risk death. Considering the contradiction this is to ape shall never kill ape, one has to presume that Zaius and his predecessors found other means to discredit, demote or otherwise stop other investigations without direct executions. One could even believe that in some cases, such apes who kept their mouths shut were promoted, became part of the conspiracy or used as spies for any other ape who took up such an unusual interest. As such, it would also be unfair to put all the blame for this on Doctor Zira’s shoulders for what was seen as a serious investigation in her reality.

There is a contradiction as to why was Zira and her fellow scientists were allowed to do such investigations when it could so easily head into the direction of ‘Forbidden Knowledge’. If anything, Doctor Cornelius’ archaeology investigations was even more so, especially with his discoveries of an earlier civilisation. One could surmise that Zaius could keep an eye on such studies and curb them easier than accidental discoveries or point out they were from an earlier ape civilisation.

There is a significant difference between their reality’s history and our own reality. The fact the space virus hadn’t killed off domestic animals hadn’t happened yet when they arrived in the past would suggest that reality had already changed by their presence and that their future ceased to exist. There is a possibility that both apes were ground zero carriers of the space virus as it was uncertain if there were any other space flights after Brent’s loss. Oddly, Hasslein’s queries only covered Taylor not Brent, which would suggest there this reality did not have a second flight or it might have not have been sent after their arrival. After all, there would hardly be any point sending the second starship with the knowledge that Taylor was dead and the Earth destroyed in the future, strongly suggesting that this was yet another alternative reality. The evidence that Doctor Cornelius gave at the trial about the Earth’s destruction gave no indication as to who was responsible. If anything, it was remarkable that the chimpanzee Milo was able to locate Taylor’s spaceship and launch it, although one could presume that the lake it had sunk in had dried out in the months it had laid there, allowing both it and the escape hatch to be located.

One would also have to speculate just when did the humans became no less than mute savages. From what Doctor Cornelius discovered and given at the trail, in his reality, a virus brought back from space was responsible for killing all domestic dogs and cats. Apes were brought in initially as a new range of pets and over time became slaves when it was realised that they could be trained to do many menial tasks. This training obviously aided in their developing intelligence and eventually one chimpanzee called Milo finally spoke, saying ‘No!’ when ordered to do a task. Rebellion soon followed. Quite when the countries attacked each other with nuclear bombs is uncertain. However, what little civilisation was left was deprived of basic electricity and indeed most modern amenities. Essentially, life was back to if not the Stone Age, then certainly the Iron Age. The apes, however, became the dominate sentience and the humans the savages. Whether this was caused by the radiation or other factors is unknown. It certainly resulted in the Forbidden Zone in ‘Beneath The Planet Of The Apes’ and its mutates.

Although the latter evidence was not known by either Cornelius or Zira, the fact that there psionic mutates in the Forbidden Zone, the apes sentience and the humans lack of intelligence could all be attributed to the combination of radiation contamination and the space virus. It would have been unusual had this space virus only been specific to any particular species on Earth when it might also have affected the DNA of other species. Whether the three apes knew they were carriers would have been immaterial as the effects were a nexus in all realities for the ascent of apes to sentience.

Had both Cornelius and Zira survived to see their son, Milo, who later chose the name Caesar, create the ape rebellion on Earth, then they would have realised that their own future was indeed just one of many alternatives. One reality, would have had none of them return into the past and what might have constituted the reality depicted in ‘Planet Of The Apes’ and ‘Beneath The Planet Of The Apes’. Although Caesar was the first talking ape from a specific future genetic make-up, it was a female chimpanzee, Lisa, from the present who was the first to speak of the current reality. As such, this kept very much with the apes developing their ability to speak in present reality regardless of the presence of Cornelius and Zira. All the presence of Caesar did was advance the rebellion by several generations, as depicted in ‘Conquest Of The Planet Of The Apes’.

There was still an ensuing nuclear war and the overall effects left the apes in ascendance and the humans that were left, leaderless, their servants instead. Considering the use of nuclear weapons elsewhere, there might not be anything left of the rest of the world. One would have to wonder how much of this was the result of nuclear fall-out or even the effects of the alien virus that destroyed the cat and dog population, mostly because it wasn’t many generations that passed before all apes could speak but demonstrated intelligent behaviour that same generation. One could surmise the change was already taking place and that maybe the decline of humans into savages was just going to take longer from the results of the nuclear fall-out. Whichever, the decline of mankind was not caused solely by the apes even if they were the chief benefactors. Whether the future of this reality had a time when Taylor or Brent’s spaceships arrived would be uncertain. One would suspect not for this particular time-line and by not casting out the humans, the apes might actually have preserved their former masters’ intelligence. It is important to realise this because Zira is under trail for supposed crimes in a future reality that no longer exists so how could she be guilty of anything? It is also Hasslein’s own theory of multiple realities explained on a TV programme that would confirm this belief.

The ramifications of Zira’s trial was her not being given equal rights in the American judicial system. As a chimpanzee, she was seen as an animal not a sentient being and as such how could she have performed such surgery in the future. If she was being classed as a war criminal, no matter the species, under US law, she would have been entitled to proper legal representation and that wasn’t given. Under this, the points I made above would certainly have been raised and with Doctor Zira no longer desiring to continue her career, should have been exonerated instead. Whether Doctor Hasslein would have liked this decision or sought an appeal is open to speculation. All he saw was the possibility of talking chimpanzees breeding with the native chimpanzee population and giving more talking chimpanzees. Even if that were to happen, it doesn’t explain how either gorillas or orang-utans rise to sentience.

Whichever, the humans did not learn from this lesson from the future. They might not have been able to stop the death of domestic pets but they certainly could have prevented turning apes into slaves, already knowing the consequences of such an action. It isn’t as though there weren’t other animals that could have been domesticated although I doubt if ‘Planet Of The Meerkats’ would have been a top selling film. If anything, mankind in this reality orchestrated their own doom without any help from the apes.

One could speculate that had Cornelius, Zira and their son been allowed to live unmolested, then they would have had a say in preventing the enslavement of the present day apes and might well have saved human civilisation by doing so. As it is, Otto Hasslein’s actions contributed to the end of human domination on planet Earth and should have been vilified accordingly.

A lesson to be learnt when all actions have to be considered in such circumstances in the future.

All rights relating to observation of the original

No infringement of existing copyright to these films is intended, just interpretation

Planet of the Apes coming back for one more movie (film news). 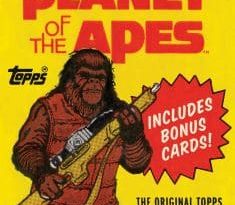 Going ape: the original Planet of the Apes films, a retrospective (video).

Going ape: the original Planet of the Apes films, a retrospective (video).

Planet of the Apes coming back for one more movie (film news).