In other books from Michael Wiese Productions, there have been sections dealing with how to sell scripts in Hollywood. I’ve used the entire title of Heather Hale’s book ‘Story Selling: How To Develop, Market And Pitch Your Film & TV Projects’ just in case your eyes play tricks and you think the main title is ‘Story Telling’ as it’s an easy mistake to make. Which two words roll off your tongue better? 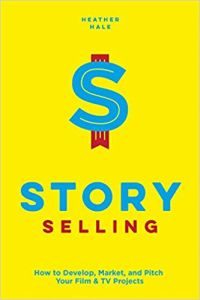 Heather Hale quite rightly points out that film studios don’t have time to read every script that is sent them but they do spend time with loglines. These are brief paragraphs or even sentences describing what the story is about. A lot of people at the studios read these as they rise through the food chain. A successful logline will eventually lead to them actually look at the script to see if it has legs. Hale’s book is littered with loglines from successful films so you can learn from the best. She also points out that it’s important to look at the failures as well so you don’t make similar mistakes. Even so, getting a good logline is a lot of hard work and this book shows you how to do it properly. You also need to get in a lot of practice even when you’re not pitching an idea. Oddly, although much longer, writing a review is a form of similar practice in abbreviating what is read into a brief synopsis so don’t just think it’s a singular skill to selling a script.

There’s also a sharp reminder never to email attachments simply because they are always likely to be virused and no one will open them so always put any material in the text box unless told otherwise. I think that applies to any industry these days.

The section of beat outline also extends beyond scriptwriting as it’s a way to formulate a plot to make sure the viewer or reader keeps going and for you, the author, to keep on track. I know some of you will think this is plot formula but it is your skill as a writer to make it less obvious and a reasonable following of events.

I was surprised to see series bibles covered here. More so as it can be used to sell an idea for a series. Seeing the page count for some of these, including some notable SF ones, should make you think, more so as a series can’t be sold without one. It does make me wonder if there should be a book showing how to make a TV series bible sometime.

Heather Hale also goes on to explore how to do this with reality TV and other such shows and there is an extensive what and what not to do section that should be heeded. As the main studios hire off smaller studios, you should be aware of not aiming for the top stands a better chance of being seen.

Although this book is primarily for the American audience, there are references to some British companies here as well. If you want to become a successful scriptwriter then this book is your bible on how to do it properly and look like you are getting your professional chops. All you have to do then is have your talent to back it up.

check out websites: www.mwp.com and www.heatherhale.com