If proof were needed that Stephen King is a god of some sort, consider this. In the 1970s, he decided that he would allow filmmakers to make movies of his short stories for a dollar. These were then shown around the world at film festivals.

Anthony Northrup has undertaken the not inconsiderable task of compiling these efforts into a book, ‘Stephen King: Dollar Baby: The Book’. It’s a comprehensive look at the huge back catalogue of effort that many would be unaware of, even if they are a fan of Stephen King. 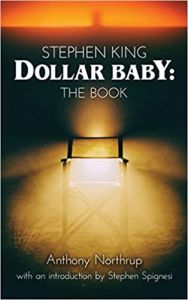 Films have been made under the scheme for forty years and Northrop has been reviewing and hosting festivals of them for almost a decade.

Part One is a series of essays about Stephen King and the influences he’s had on different people. They are all highly readable, some shorter than others. These are by writers, directors, and fans of King who has had a prolific output over the years and influenced the horror genre in stories and films.

Part Two is all interviews with the directors of various ‘dollar baby’ films carried out in the last eight years by the author. There is some biographical detail and discussion around the chosen story, production, and other elements.

The final chapter in this section is about the as yet uninterviewed Frank Darabont, who not only paid the first dollar, ultimately making the second film but went on to write three of the best-adapted screenplays of the novels of Stephen King, including ‘The Shawshank Redemption (everybody’s late-night watch) and then developed and co-wrote ‘The Walking Dead’ for television. Everybody wants to be Frank.

Part Three ties up the book, with various lists and thoughts on those stories filmed already and those available currently under the scheme. There is some short thought by previous directors and there is a full chapter on what the directors have done since making their baby.

This is a reality check on thinking this brush with movie-making leads onto fame and riches. It’s a sobering update when you see that life and commitments get in the way of your dreams.

If you are interested in writing, directing, and in Stephen King, this is an interesting book that looks at process, motivation and offers some insight into the film-making world. It also highlights that King is a talented and generous author who makes the world a little bit better by his ‘pay it forward’ attitude.