With the spate of Vault books in recent years, I did wonder if there would be any type of books that could compete with them. ‘Star Trek: The Next Generation 365’ must surely be a contender and more importantly, it’s twenty-five years since the series first started on TV. I should point out from the start that its size is that of the first day stamp cover albums you might own, which would make it fun as to where would you store it on your bookshelves. It is also a massive 365 pages long with each pair of pages divided into mostly text and full page photographs. The latter might vary a little depending on whether it’s behind-the-scenes, props, merchandise or whathaveyou but it’s a good collection of material. If I was to be critical, then there’s the occasional time where some of the blueprint pictures could have been larger making their text more readable. There were also times I wish that there were more captions associated to the photographs as to their significance. It isn’t as though there wasn’t room on the text page side. I should point out that there is also plenty of text. I spent the first hour reading and hadn’t realised the sheer weight of the book had sent one of my arms to sleep. This isn’t a page by page on each episode. A lot of episodes have multiple pages and there’s a nice balance of breaking away occasionally with pieces on people, special effects and significant events.

This book by Paula M. Block and Terry J. Erdmann covers the seven seasons of ‘Star Trek: The Next Generation’ and makes it difficult as to what to pick out what struck me the most, so you’ll have to forgive any oversights or any quirkiness in what I pick out. Take the group photo opposite page 004, their numbering, and wonder just what half the crew were looking at that the others seemed oblivious to. The photo page opposite 014, shows all of Andrew Probert’s designs of the Enterprise, including the one that sold David Gerrold in showing it to the rest of production. I’m just going to refer to the pages to look hereon or I’m going to go a little wonky. With page 021, there’s an early design mock-up of the Enterprise bridge when it was originally going to have a small conference table as opposed to the separate Ready Room that evolved for the show. Shame it was never used. I suspect it could also have doubled for a game of poker in their idle time.

With page 049 and the props, has anyone else had any thoughts that the PADD has now been duplicated in our reality with the iPad/tablets, but then so have flexible musical keyboards. Makes you wonder how they are going to advance it in four centuries time now, doesn’t it? A lot of the prop photos are also the most you’re going to see of them since their auction but reading how much they sold for is quite illuminating. Likewise, the cost breakdown of each episode. Three thousand dollars for a phaser blast in the pre-CGI shows how cheap things have gotten today.

Before anyone thinks I’m just focusing on the photos, the text gives a lot of illuminating info and odd mistakes like discovering their accounts in the early seasons wasn’t being kept properly and going over budget. Information like this keeps things on track and reminds the reader that this book isn’t going to be sugar-coated although I wish a little more had been done regarding the turnstile turnaround in the writers’ room. I obviously haven’t been keeping up with Trek lore, especially when I discovered that Gates McFadden’s absence in season two was because she was fired as opposed to wanting to act elsewhere. The uniform changes over the seasons for various reasons is also interesting although only two Starfleet officers has an open-zip tunic in later seasons.

If you were ever curious about the rules of Trek’s Open Submissions Policy, three readable pages are shown as to what they didn’t want. For those who would like a book-size copy of the Enterprise-D painting that was in Picard’s Ready Room, then feast your eyes on the page opposite 233. Likewise, the painting that Data was working on in ‘Hero Worship’ is also shown, as is the Picasso-like painting of Spot the cat. Just to add topping to the cake, there’s a physiology breakdown of the Klingon skeleton. Not too sure about the double humerus and femurs as I’m not sure if they would give added skeletal strength but it would certainly have made for different muscular configuration.

Just in case you think I can’t be critical, although the need of a full-time therapist, in the shape of Deanna Troi, was a reaction to the 1980s, I tend to think what goes around once is likely to happen again. Without that, the future as depicted in ‘Star Trek’ would not have anything that looked familiar.

A lot of the off-set photos are rather candid and seeing a friendly Pickard hugging a group of Borg on page entry 312 will make you wonder whose side is he really on. Another photo with entry 314 is showing the three different sized models of the Enterprise as built by modeller Greg Jein.

If you’re a ‘Star Trek’ fan, it’s inevitable that you’re going to pick up any book on the subject. It’s nice to report that some books are better than others and that this is one of them. It makes for a hefty read and a lot to digest. How much will be new to you depends entirely on how much Trek lore you know already but I still bet there will be some surprises here. For me, as a final note, I’m just wondering how well the Borg Air Freshener sold. Go boldly forth.

Star Trek the Next Generation, says “Some kind of…” 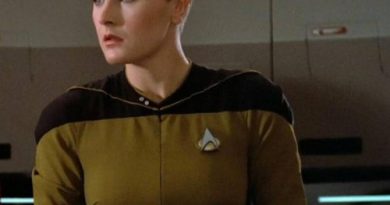 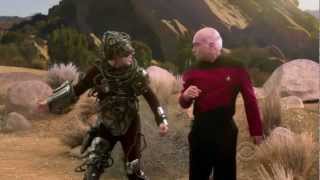 The Big Bang Theory does Star Trek the Next Generation.