The rather unheroic hero of this Science Fiction novella is Travis Schrader, a security guard with a degree in electronics which means he gets $15 an hour instead of $12 for his night shifts at the Gulch Group Data Centre, Jefferson County, Kansas in the year 2023. We join him on his journey to work as he ponders his life, big data and what might have been. 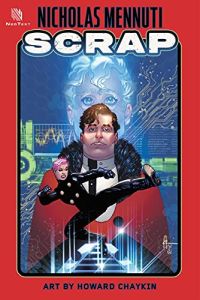 Travis has little contact with anyone else. His girlfriend left him. His best friend since age ten is Billy, a car-scrapper, but he doesn’t see him much. He works his night shifts half-drunk so that he can be alert in the day for his on-line fun, gaming, chatting and so on. In truth, hardly anyone would miss him if he vanished and that’s why he does.

An agent from ‘the Formalised Federation of the most honourable George Herbert Huxley-Wells’ kidnaps Travis, knocking him out. He wakes strapped to a table in the year 2431 where a nice doctor tells him about the future and his mission. Later, someone kindly explains to him that he can be plucked from time because he is so utterly insignificant that it won’t make any difference to history or anything. In between, he has an exciting adventure that I won’t reveal.

The science part of this Science Fiction novella is an extrapolation from present day social, economic and technological trends, including quantum computing, so it’s thoroughly up to date in that sense. On the other hand, after a slow start getting to know Travis, it read like a 1950s SF adventure novel, so I liked it. I didn’t like the fact that it’s clearly part one of an on-going story and not complete in itself but that’s publishing today. The series rules.

Part of the lure for me was illustrations by Howard Chaykin. However, much as I like Chaykin’s earlier comicbook work, the digital art pieces that accompany this text didn’t thrill me. They were okay but not a reason to get the book. However, the text provides reason enough. It’s not a five-star classic but it’s a quick, easy read and a solid yarn about an interesting dystopian future. Entertaining