When I was looking up the bibliography from Gary Westfahl’s book, ‘The Mechanics Of Wonder: The Creation Of The Idea Of Science Fiction’, I found several that I hadn’t read. ‘Science Fiction: What It’s All About’ by Sam J. Lundwall is one of them and dspite coming from 1971 is still out there. 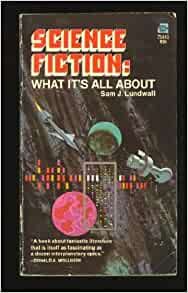 In his introduction, Donald A. Wollheim points out that everyone assumes SF started in America when the likes of Jules Verne was French and then ran off a list of other foreign nationals from long ago. Hardly surprising that Hugo Gernsback was a Luxenberg immigrant. Sam J. Lundwall (1941- ) is Swedish and the original version of this book was written in that language. Wollheilm convinced Lundwall to re-write it in English and consequently added new material back in 1971. Hey, we’re nothing if up-to-date here. I’ll pick out some of the highlights.

In many respects, reading early books about Science Fiction does have some advantages. We are seeing perspectives from people who were actually there and the source books that later writers on the subject relied on for their information. When you look at books on SF, even 40 years back, their bibliographies are significantly smaller as there was fewer books about the subject.

Lundwall’s history of pre-20th century fiction which although not called Science Fiction was often borderline to it and certainly fantasy has a long history in our literature. He believes SF only came into its own when we advanced in science. Looking at some of the early stories, like having swans flying to the Moon in the priest Francis Godwin’s ‘The Man In The Moone’ had the idea of destination, just lack of knowledge to do it with. I mean, space with no atmosphere? Really? Even in EE ‘Doc’ Smith’s time, space was still referred to an the ‘ether’ even though nothing was there.

Rather oddly, someone I would have expected to have a bigger presence, Cordwainer Smith, barely gets a mention. I should point out that the index is not complete but in those days it only hit on significant text. Whether this was because Smith’s novels/anthologies weren’t distributed in Sweden or not in Lundwall’s reading list at the time is the question. With any books of this nature, it depends a lot on what the author has read and could fit into the pages and some are inevitably left out.

Saying that, he also doesn’t appear to be in a second Lundwall book I pulled, ‘Science Fiction: An Illustrated History’ and according to his bibliography, 4 books later, that I picked up at the same time.

Of significance, Lundwall does acknowledge that Ray Bradbury is not a Science Fiction author and is probably covered to explain why. Even so, Bradbury still gets lumped in with SF and even he didn’t believe he should be there.

It’s interesting reading the chapter on ‘Women, Robots And Other Peculiarities’, to see how far we’ve come in the past 40 years although I was surprised on how much sexual activity was covered. Certainly, the woman as a secondary character is now no longer applicable, even if it’s only in fiction.

Lundwall was also bold enough to look at SF in other formats, including comics and TV series. He wasn’t impressed with ‘Star Trek’ and with his job as a Swedish TV producer didn’t order it up. When it came to films and, bear in mind there were fewer SF films up to the 1970s, I did wonder if he would miss any. ‘The Day The Earth Stood Still’ and ‘Forbidden Planet’ weren’t covered, although the latter was in ‘Science Fiction: An Illustrated History’. This might be purely down to what was released in Sweden at the time but you would have thought he would have seen them, let alone British SF like ‘The Day Of The Triffids’ and ‘The Day The Earth Caught Fire’. It isn’t as though other films weren’t on his radar.

Of significance, Otto Witt’s SF Swedish magazine ‘Hugin’ was released in 1916 which means it was the first and ahead of the American market. Not that it was brilliant. According to Lundwall, Witt out-did Gernsback coming from the same mould. The European fandom was also doing well prior to the Americans as well developing its own fanzine culture.

If you’re an SF author in the slump because of the lockdown at the moment, it is worth picking up on early SF history books or analysis of same at the moment. A lot of them do flash histories and synopsises but they can also remind you why you got interested in Science Fiction in the first place and might want you to investigate further.

I’ve been critical on some points but this is also with a 21st century perspective as well and as a reviewer, it’s in the training to look for good and bad points. Lundwall writes well and authoritatively, even if there are a few blind spots and you will certainly want to check out some of the books he refers to, which is a good sign. You also get some insight into other parts of the world and how SF evolved there as well. 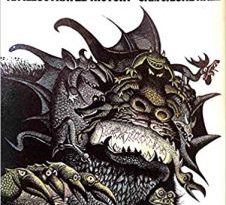