Donald G. Mackay’s book, ‘Remembering’, has a longer more significant sub-title, ‘What 50 Years Of Research With Famous Amnesia Patient H.M. Can Teach Us About Memory And How It Works’. Remember the sub-title as it might come up later.

The ‘H.M.’ is actually Henry Moliason (1926-2008) who had a life-threatening form of epilepsy and at the age of 27 had brain surgery in 1953. This worked but in the process, his hippocampus and also the amygdale, the root of emotion, was destroyed resulting in Moliason could no longer form new memories. Doctor Mackay spent 50 years studying Moliason to explore how much he could remember. Although the results of this are covered in this book, Mackay also explores how memory works in normal people as they age as well. 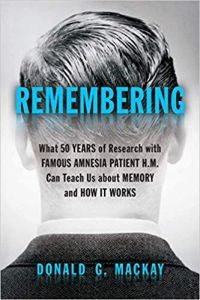 As we’ve often come across in the press, especially as you get older, you need to work your muscles to keep them working, but the same also applies to the brain. He recommends people joining book clubs so you can read and discuss books. I was thinking this would also be a good recruitment drive for me to get more reviewers as it serves a similar function. Reading encourages all parts of the brain. The general conclusion is use it or lose it also includes the grey matter in your head.

Mackay goes over the problems of getting the establishment to accept his findings. Dissuading them from only accepting one hypothesis as being correct can be traced back as far as Aristotle in my opinion and people are reluctant to change. If something is still seen as a hypothesis then it deserves to be cross-examined when new facts come to light.

One thing I would question is although it is accepted that physical exercise is good for the brain, other than blood circulation, there is still little to explain how it improves the synapses.

It’s interesting to note that Moliason had no problems developing ‘muscle memory’. I have to confess that I see the name as a bit of a misnomer as it’s not so much the muscles remembering things unconsciously but the autonomic nervous system taking over which controls most of your reflexes. Once it’s trained in a particular action, like typing, it just follows the brain’s orders.

Mackay also touches on how easy it is to manipulate people by continually repeating wrong or fake information which should make you all look up and buy this book. It is the repetition that gets into your heads not the accuracy. I just wish Mackay explained more on how to countermand it because it is a subtle level of brainwashing that most people are susceptible to.

The exploration of what makes a genius tends to focus on imagination although I would be more inclined to also add being pig-headed enough to stick our ground when we have sufficient information to prove we’re right and go against the establishment. A lot of people aren’t consciously aware all the time and place most things into their background information and ignore it because things are just so. Shaking up that order is what tends to scare the most. Me? I look at reality as a set of patterns and the odd things just stick out. Mind you, at college and work, this was deemed disruptive.

I wish Mackay had included a few more tests like Anne Treisman’s awareness test. Oddly, he describes the Ponzo illusion of two lines without a picture. Looking it up, there are several versions on-line and I’ve included one of them here. Which of the two horizontal lines is shortest? Your sense of vision can be confused by perspective. The same can also be said if you have two horizontal lines with one line having inverse arrow pointers. Never believe the eye can’t be fooled. It happens all the time. 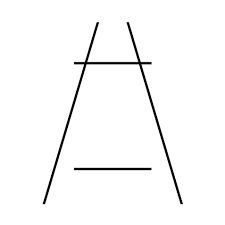 As to which side of the brain is used for creativity and analytical and its predominance, I think I must be an oddity because both are strong in my head. I do think this is something else that has caught in the public psyche that you can only be one or the other so there is little attempt to develop or use both equally.

Mackay points out that humans are capable of 10 million distinct colours did raise my eyebrow because there simply aren’t that many. There are 9 main ones, including black and white, and everything else is shades between and most humans can’t identify these by name.

Towards the end of the book, Mackay raised a point that Moliason was developing some elements of present memory. Not much, but some. It has always been stated that stroke victims develop new channels in the brain away from damaged areas and replace their function. Granted Moliason had serious damage to a particular part of the brain but Mackay shows that there are some limits.

I wasn’t sure what I was going to learn from this book but as you can see from above, it hit on several things that I was familiar and had experience with. I suspect the same will be true for you as well. I hope Mackay does a follow-up book exploring these processes in more general terms and show more about how the brain works.