I recently came across ‘Psi High And Others’ (1967) and remembered it was on to read list years ago. Its author, Alan E. Nourse (1928-1992), a medical doctor who paid, in part for his education by writing SF stories and continued after qualifying. If the name sounds familiar, the title of one of his books, ‘The Bladerunner’ (1974), was used for a certain 1984 film. Because of the film, his book doesn’t appear to have been reprinted since and buying a copy is expensive. 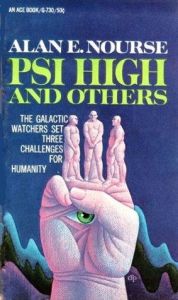 This book is actually three stories with a bridging background of aliens watching Earth’s development and Man moving to the stars and whether they might one day belong to the Galactic Confederation.

The first part, ‘The Martyr’ highlights the problems of a rejuvenation programme and how it was developing from a few select people and already becoming elitist between those with long-life and those not. This is seen from the perspective of two American senators who are also brothers. One has had the rejuvenation, the other with heart problems is reluctant but highlights a problem.

When the rejuvenation was seen as the means for prolonged life in space and coming home to people they are familiar with has stalled. With more time, people have slowed the project down because they have plenty of time to complete it in. Nourse’s take will make you think. Prolonged life and space travel is an established trope these days but this actually feels like a take no one has addressed since.

Until I started reading, I had always assumed ‘Psi High’ might have been an education establishment, mostly because Nourse wrote adult and junior SF books. It’s not. It’s whether you have E.S.P. or not, mostly telepathy. In this reality, a key senator does not like them and such people have to registered and forbidden to marry. When a telepathic alien lands, disguises himself and wants to see how far psionics has progressed on Earth, the most powerful Psi-Highs are employed to find him.

From there, the plot is spoiler with a massive surprise at the end. Looking at it from my perspective, from writing ‘Psi-Kicks’, there was a need to ensure my stories were still unique. No problem with that. I would question how a non-psionic can teach any Psi-Highs how to use their powers although we never meet this mysterious Dr. Abrams. Much of this story is more to do with the chase and political problems than really demonstrating the talent itself but you have to remind yourself that this story was written in 1967.

The third section, ‘Mirror, Mirror’, is more to do with aliens on Saturn and humans using avatars to fight them on-planet. Back in the day, the gaseous planets were thought to have solid ground deep under the clouds. We know better these days. Even using avatars isn’t new. Poul Anderson did it originally with ‘Call Me Joe’ in 1957.

Where this differs is Proust has a mental breakdown after returning to his own body. In some respects, this is the weakest story, not because of the faults noted but not enough space. Back in the day, a 160 page novel was considered the norm. As the Psi-Highs are only mentioned, one might even consider this a move to put all three stories under one cover.

Whatever, Nourse was a talented writer, often exploring ideas others missed and well worth a look if you get the chance.