‘Everything You Dream Is Real’ by Lisa De Nikolits is a sequel to ‘The Rage Room’. It is near future Science Fiction set in the aftermath of a world war. 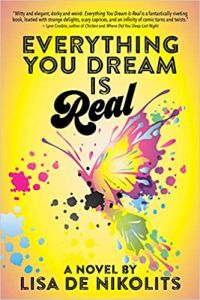 Sharps Barkley wakes up in a weird dark cave where fish ‘swim’ under his nose, unsure of his past. Noelle is on a mission, driving through the dystopian Earth with its killer mutation of the Monarch butterfly, to rescue Sharps from a virtual rage room on the Mainframe computer. When she gets there, she finds the reintegration pod that would get Sharps out of there missing. Noelle, being part of the government, calls for help, particularly from Mother, who is Sharps’ mother.

Meanwhile, Sharps finds he has company, five time travellers like himself, four of whom are hardened criminals. They want out of the virtual environment as well. So when rescue does come, they all piggyback on Sharps.

While the government are sorting out the five minds, Mother, Sharps, his girlfriend and two children are kidnapped by the unstable plastic surgeon, Alpha Plus. They are taken to his Fountain of Youth compound, full of beautiful people and the luxury of free-flowing water. The place is a dreamlike ideal that has its own secret: a subterranean sex trade funds the compound.

Can Mother, et al escape or be rescued? Do they want to be rescued from this seeming paradise?

This novel has as its main premise: ‘The Dream of Congruence is when your dream and reality become one, and everything you dream is real.’ A sub-clause asks what an individual is willing to sacrifice to achieve such a dream?

‘Everything You Dream Is Real’ goes at pace with twists and sub-plots to resolve the threat of Alpha Plus, but is interspersed with scenes of the protagonists relishing various forms of enjoyment. There were times when I felt the solving of problems came across as a little too easy. One example is all the golf carts being programmed to steer to the tree house once the blue button under the steering column is touched. Another is Mother being allowed to snoop around the tree house so she can find Alpha Plus’ link to the Mainframe. There were quite a few more.

This novel does contain some touches of humour, like when Alpha Plus used his plastic surgery to make all the leaders’ wives look the same. I suspect the convenient plot devices mentioned above may have been attempts at the more farcical type, which completely past me by.

In the end, this felt more like fantasy than Science Fiction, which should not be surprising considering the theme is based on dreams. As a sequel to the excellent ‘The Rage Room’, this left me disappointed. Had it been a standalone, I would have rated it as an interesting read. 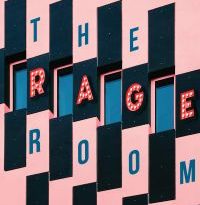