‘Justice League Vs. The Legion Of Super-Heroes’ starts off with Justice League Annual 2022 and then the six-part mini-series of the title name. The annual, featuring OMAC, is basically the introduction to something is muddling with time travel and various realities. It’s a bit hard to attest who the artists are as the indicia is rather vague. Having characters with small irises in expanded eyeballs does tend to suggest madness than intelligence which is not a good way to portray OMAC. 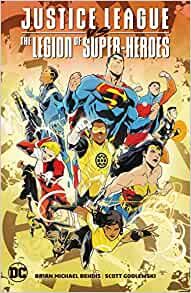 Then we get to the main event…sort of. The actual title of the mini-series was ‘The Gold Lantern Saga’. Kala Lour is a member of the LSH and I still wonder about the change in the charter that allows a Lantern into the team that point-blank refused anyone without natural super-powers. Considering Lour is answerable to the Guardians of OA and has a mostly sentient ring, he isn’t a high-ranking Legionnaire. Their charter must have been amended as Legionnaires are normally selected with innate abilities.

You can make some assumptions that time travel has to be involved for both teams to meet. The connecting line is a ‘deep darkness’ is enveloping parts of the cosmos in both time periods. The LSH find out about this first and, on investigation, one of Triplicate Girl’s bodies is thrust into the past and has aged nearly a hundred years. I had to have a second look at that because other than a couple lines on her face, she looked pretty much the same as before. The fact that she also appeared in the JLA’s headquarters and them not knowing who she is didn’t help until she asked for Jon Kent, the junior Superman, who flies in to fill everybody in. Contrary to the book cover, his dad isn’t in this book, Dark Adam appears to be the stand-in. Oh, oddly, there is more done to identify who the JLA are than the LSH and there are still a few bodies there I don’t recognise but don’t do much anyway.

Having to be careful not to go too spoiler, the JLA get to the future and Batman gets information about which villains have the reputation for messing with time and hones in on the wrong one. You would think even the world’s greatest detective would have looked at all the candidates, more so as the LSH itself has been sanctioned for playing with time themselves by the United Planets.

Instead, divided into smaller teams to investigate, they are all thrown into different time zones and encounter different people like Jungle Boy…sorry, Kamandi. Some even meet the first Green Lantern, Alan Scott.

The graphic novel title is also a bit of a misnomer as the Justice League does not fight the Legion. There is a lot of philosophising and the actual battle with the main villain is over in a page.

A few characters stand-out from the rest, primarily because that’s what they are good at and the rest stand around. With 30 characters, I’m using the back cover as a counter, that’s a lot of bodies to cover.

There is a lot of Interlac in this book and unless you have a ready translator, you’re not going to be able to work out what its about.

Scott Godlewski is the main artist of this book, it’s a tough call to draw so many super-heroes. His layouts tend to work but he does tend to give all but Batman and the bearded ones pointed chins, even Wonder Woman, and low foreheads. It’s a shame decent embellishers to add detail don’t seem to be in vogue these days to add texture.

I read the main mini-series in one sitting but I wouldn’t call it a monumental story. Principle weaknesses are the damage to time doesn’t appear to be taken too seriously, just another chore in the United Planets schedule where the LSH is ordered to sort things out. No actual planets were harmed in this book, so you do have to wonder why this threat didn’t have stronger repercussions. 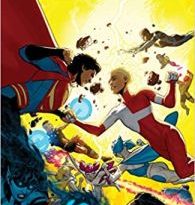 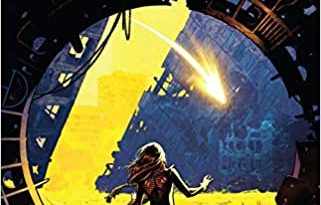