The opening of this ‘Retro Fan’ has an interview with actors Angela Cartwright and Bill Mumy with a reveal of more photos discovered from behind the scenes of ‘Lost In Space’ and made into another book. Some samples are here, including them with Burt Ward as Robin because as kids, they could roam the other 20th Century Fox sets and watch what happened. I loved the fact that fashion dummies stood in for them in set-ups while they did their lessons. 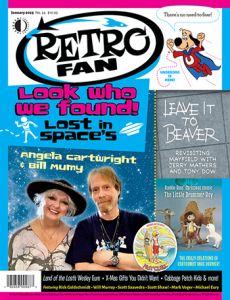 The ‘Leave It To Beaver’ (1957-63) TV series never got shown in the UK but I’m increasingly learning more about the subject here. There is a note in the introduction that older brother actor Tony Dow died this year.

When I was young and reading about some of gadgets available in America, I didn’t realise they were big catalogues of them. Scott Saavedra looks at the Vernon catalogue and a varied selection. The ‘Johnny Clock’ based on a toilet seat to be hung on the loo wall raised a smile. Of all the items shown here, I do remember seeing the ‘Little Black Box’ once in a novelty shop in the UK.

Scott Shaw! examines the illustrated surf works of the late Michael Dormer. Again, something not readily known in the UK although I like the surfer parody character Curl’s look and statue shown here. I’m still puzzling over Shrimpenstein but maybe because he reminds of the ‘Big Frankie’ model.

Andy Mangels’ look at and showing the various ads for mostly TV cartoons practically feels like collecting the set, although I doubt it many will have the 1966 Casper’s shows. Even so, it does demonstrate the power of comics at the time as well as promoting DC and Marvel Comics characters.

Another show I can’t recall hitting the UK is ‘Land Of The Lost’, the original not the film version, although I’ve seen neither. Ernie Magnotta interviews actor Wesley Eure who played Will in the series, affirming he and actress Kathy Coleman are still on the convention circuit amongst other things.

Another TV show that years later also became a film is ‘Underdog’. Writer Will Murray looks at the cartoon series, done primarily as a super-spoof and developed a cult following. Just be careful about eating Super Energy pills.

Animagic’s stop-motion ‘The Little Drummer Boy’ (1969) was, again, not something I can recall over here but Scott Goldschmidt’s description of how parts of the original has been lost over the years certainly justifies some work in pulling it back together, based on the photos shown here. There has been a remake but things like that happening always seems like a another piece of lost history.

Do I have to convince you to buy ‘Retro Fan’? There’s always a buzz of history and nostalgia with every issue and this one actually re-enforces that.

Lost in Space TV series on Netflix gets its season 3 (news). 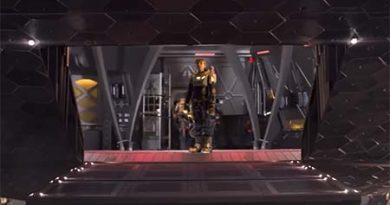