The word ‘novel’ means new. Originally, a tale of over 60,000 words would have been a novel idea and the word became attached to longer fiction but with novel-length books being so common, the word needs to be attached to the content. What is new could refer to the plot, the characters, the setting or even the approach to the content. 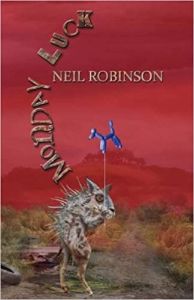 There is nothing wrong with the quality of the writing in ‘Monday Luck’ by Neil Robinson. It is the structure that gives rise to confusion. The book is about a group fortyish people who haven’t really grown up and two of them are divorced. What they have in common is an interest in weird happenings. Initially, the book appears to be a first person narration by Simon (Si) Smith. He is a freelance editor and takes the boring jobs to pay the bills. His girlfriend is Amanda Danu, who claims to be part-alien.

His friends are Lenny, who is a not very good children’s entertainer and Greg, an American working for a bank. The problem is that the narrative tends to veer into third person, even when Si is present and much of the time he isn’t, making the reader wonder if the other three are real or figments of Si’s imagination.

Greg is on the lookout for the Next Big Event which he is convinced will happen in England, so when they spot a newspaper report of a face appearing on the side of a caravan, they go to investigate. The caravan is the home of Marian Harper and her two teenage children. It is close to Watchman’s Hill Woods which has a reputation for weird happenings. Lenny takes up with Marian and gets sucked into some of the illegal schemes of her son, Stuart.

The problem with this book is that the plot is actually very thin and most of the weird happenings can be put down to drugs. Much of the bulk of the book reads like a series of short stories that have been inserted in place of plot development.

While it is necessary for the writer to be familiar with his characters back story, it is not always sensible to put all of it in as Robinson does. We get the whole of Greg’s life story, including his childhood family issues and how Si’s relationship with Amanda began on a train. We get Lenny’s mishaps at his parties and events that Si hasn’t been at. The book cannot make up its mind whether it is a third or first person narrative leaving the reader wondering where the reality is in these people’s lives.

To have a story which follows the misadventures of a group of older people rather than either all young or a mixture, is refreshing and, if this had been just that, without trying to persuade us that the strange things they appear to experience have veracity, it would be easier to appreciate. Trying to tack on the fantasy doesn’t work because that element is not strong enough to sustain the feeling of maybe these events could be real.

There are attempts at humour but it is not sustained. Ultimately, this is a series of episodes in the lives of a bunch of ageing Essex boys. I have read more enthralling approaches to similar material.