There’s a library under a graveyard in the middle of Edinburgh. A library of magical and mystical knowledge that is most definitely not a place for the likes of Ropa, but she can’t stay away. Imagine being able to summon fire or mess with entropy. Proper learning. Understanding the universe levels of knowing stuff. Miles and miles away from her day job delivering messages. 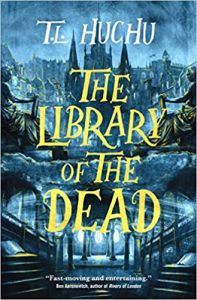 Ropa speaks to the dead. Well, more accurately, they speak to her and she’ll pass any final messages on. For a price. She’s learnt to be firm with the ghosts of Edinburgh. No messages are given without payment. A girl’s gotta make a living, rent don’t pay itself. If you want grandma’s secret Battenberg recipe you pay first. You want your unrequited love to hear your heartfelt poem? You pay. It’s a simple enough life but Ropa is happy enough and it keeps her gran and little sister mostly well fed and safe in their caravan. Some ghosts can’t pay and some of those she can’t ignore. Nicola can’t pay but her son is missing. Ropa tries to ignore it but how can she walk away from a missing kid?

There’s a bit of urban supernatural fantasy out there lately, particularly ones set in a real world analogue such as Leigh Bardugo’s ‘The Ninth House’ and Ben Aaronovitch’s ‘Rivers Of London’ series. ‘The Library Of The Dead’ is not set in our reality with someone just seeing a layer hidden from us everyday folks. Huchu has created a world more in keeping with the ‘Felix Castor’ series by Mike Carey or Jonathan Stroud’s ‘The Screaming Staircase’ where it’s our world but just a little twist to the left.

Huchu has created a bizarrely real world in ‘The Library Of The Dead’ that is so stealthily built that it took me awhile to realise that it’s actually a dystopian alternate Edinburgh and not just a place I don’t know much about. Ghosts and ghouls are just the obvious bits. A king rules at least the city, possibly a British king but perhaps a Scottish one. An undisclosed catastrophe has pushed the social strata even further apart into tent cities and farmers gain more profit renting fields for caravans than growing crops. Women are legally able to wear knives in the city centre due to the sheer level of violence of the recent past. Where noted philosopher and sceptic David Hume has an occult library under his tomb.

The darkness Huchu creates in this novel, his first under this pseudonym and first fantasy novel, is due to the novel being from Ropa’s perspective. Ropa is barely scraping by and is part of the underbelly of the city. Her work takes her out at night and she sees things very differently to her more well off friends. Her life is tough and she has toughened up to match it, striding through the city’s streets with her green dreadlocks proudly on display that refuses to be afraid or accept things quietly. Honestly, I would cross to the other side of the road if Ropa came walking by because she screams, ‘looking for trouble.’ Ropa is a teenager, so is full of the invincible arrogance and sass of youth in the stupidest situations, not just out loud but also in her own head. Ask for advice? Delegate? Those words are not in her vocabulary.

I had to pause my reading a couple of times when I wanted to shout at her to just talk to people and ask for more than information. Ask for advice and then go storm the castle. The people in her life clearly know something is up and let her get on with it in a way that hands us a flyer for future novels in the series which is consistent with the serial nature of urban fantasy but also feels slightly off.

A tactic which clearly works since I really want to know what happens next in the world, not necessarily to Ropa, but I’m happy to join her for the ride.