‘Leviathan Wakes’ can be described as space opera, but it’s not typical of the genre. The scope is smaller and the story does not span generations. The reader does not require a glossary of terms or an extensive chart of characters and their relationships. A timeline is not necessary. What this means is that ‘Leviathan Wakes’ is easy to read. There is no flipping back and forth to refresh your memory or decode the language. What you see is what you get and what you get is a good mix of space opera, military Science Fiction, mystery, horror, police procedural and character drama all in one book. The story starts with a stomach churning mystery. I mean the seriously sinister and gross kind of churn. Then we meet the main cast. James Holden is the second officer of a merchant marine type vessel, an ice hauler that carries delivers water from asteroids to the stations throughout the Belt.

This is probably where I should point out that The Belt is the one in our solar system. It’s the line that divides the inner planets from outer planets, most of which are stations built into stable moons and other convenient chunks of rock. The Belt is more a divide than a line. Those born outside, in artificial gravity, are called Belters and their bodies reflect the difference. They are tall and thin and because of the time spent in suits, they gesture differently. They speak a patois only they understand. To someone from Earth, they are foreign. Almost alien.

The outer planets rely heavily on resources from the inner planets. They are not independent and, perhaps more importantly, they are continually reminded of that fact. Understandably, tension exists between the two ‘factions’.

So, we have Holden, born on Earth, delivering water to stations beyond The Belt. His ship answers a distress call and he and his crew immediately become embroiled in the mystery of the seriously sinister and gross variety.

Detective Miller is a Belter, through and through. He works as a cop on Ceres Station. The police have been privatised and the Earth corporation that controls the purse strings seems less concerned with procedure than results. Still, Miller is a good cop or he thinks he is. He’s uncomfortable when given a kidnap job with instructions to find the daughter of a rich man and return her home.

Beaten down by his years on the force and life in general, Miller is unsurprised when war breaks out between the Outer Planets Alliance (OPA) and Martian Congressional Republic Navy (MCRN). Holden’s discovery is the spark needed by the tinderbox of tension between the inner and outer planets. When Miller discovers his missing person might be involved or somehow at the centre of the war, he becomes obsessed with his case and Juliette Mao.

Holden and Miller’s stories intersect, complicating the mystery and the war. The two men are as different as they appear. Earther and Belter, pragmatic officer and tired detective. They are both good men with very different methods. Holden is almost painfully idealistic. Miller needs to get the job done, no matter the cost.

The character of these two men, their faults and vulnerabilities, is what makes the book special and different. Miller, in particular, is compelling. His story turns the pages as much as the escalating war. Holden’s naiveté is endearing.

There are a handful of other characters that contradict and compliment both men. Amos, Holden’s engineer, keeps up a steady supply of dry observations and bullish one-liners that ensure the book is not without humour, despite the dire setting.

The plot of ‘Leviathan Wakes’ is fairly simple and that is another of the book’s strengths. The amount of research undertaken by the author(s)* allows for much of the history to be implied rather than written out. The world is immersive and very realistic. The conclusion allows for plenty of speculation, and quite a few sequels. There are currently three novels and two novellas in the ‘Expanse’ universe. I really enjoyed ‘Leviathan Wake’s and I’m looking forward to reading the next novel, ‘Caliban’s War’. I just need to carve out another week somewhere that I can devote to being utterly engrossed.

* James S.A. Corey is the combined pseudonym of Daniel Abraham (‘Long Price Quartet)’ and Ty Franck (serial collaborator). One is responsible for Miller, the other for Holden. Interested in finding out who wrote who, I scoured the internet and found a series of interviews conducted by Carrie Vaughn. 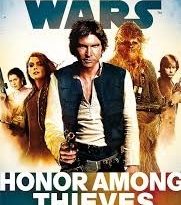 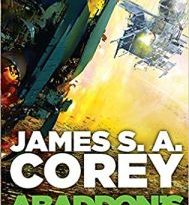 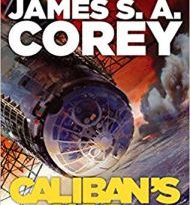