Jeff Hecht’s book, ‘Lasers, Death Rays And The Long, Strange Quest For The Ultimate Weapon’ should draw your immediate attention. After all, such weaponry is the fodder of Science Fiction or so you would think. However, military interest in such a weapon came about with the development of electricity and throwing it without a wire at the enemy. Something Tesla was experimenting with. The first laser wasn’t invented until 1960 by Theodore Maiman applying Einstein’s physics.

When you consider 4 years later it was used as a weapon against that Bond chap in ‘Goldfinger’ (1964) and certainly ‘Star Trek’ two years later, it didn’t take long to capture the public’s eye although Hecht missed these reference. Until lasers, all such weapons were thought to fire ‘death rays’. The earliest reference Hecht mentions is ‘The Andromeda Strain’ (1971). I’d probably have a field day pointing out film and TV series using laser weapons, even of the large size described in this book as in ‘The Champions’ (1968) episode ‘Project Zero’. 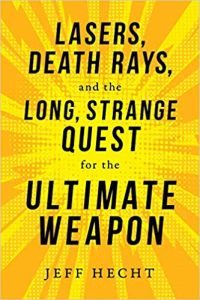 What promoted laser research was when Gordon Gould in 1959 visited the Pentagon with demonstrable uses of lasers wanting patents. The military loved his idea of using lasers to strike down enemy missiles. The problem was that Gould briefly had Communist membership in the late 1940s when his first wife belonged. As such, he couldn’t be given security clearance. This is a fascinating chapter to read as although research in six different directions was being carried out, Gould wasn’t allowed to help in anything but broad terms. A fascinating area of American security working against itself. They even took away his notebooks but fortunately didn’t spot his copies.

The technique of applied laser is called ‘optical pumping’, which I’ve never heard of before but I hope more people will remember because it’s a nice description. You’ll find out about all the materials tried here. It isn’t so much the purity of the laser light that is important but how much energy can be poured in to make it effective. When you consider that we use lasers all the time in our lives now, the teething problems shows how rapidly the research was done. Any of you raising question marks on this need only to look at your remote controls, CD and DVD players, optical telephone lines, eye surgery and so forth to accept the normality of them. Lasers are part of our lives and I hope Hecht explores other laser use in another book.

The main reason why lasers couldn’t be employed on aeroplanes for firing at missiles was because their light was disrupted by plane shaking and weather conditions. There is also the matter of weight, some 50 tons of equipment for a gas laser and less than 20% return for the energy put into powering it, much of it goes into heat loss.

Although Hecht doesn’t go into too much detail because of so much is still top security, if you’re savvy with science you can draw several conclusions about them. Chief of those is losing heat from the laser itself. They have tried multiple lasers in sync but I wonder if they’ve ever thought of separating the lasers so their beam only comes together on the target. It’ll still take time to melt through anything but it does now. The main conclusion is that although funds have been dropped from some techniques, research is still going on.

Of course, then came the Strategic Defence Initiative (SDI), also called the Star Wars program by journalists. Reading here, I’m not so sure how much of it was bluff but the Soviet Union was definitely far behind in laser research and a crippled national budget to step up to this particular mark.

This is a very informing book. In many respects, I think you’ll come away with a sigh of relief that we haven’t got laser weaponry so far. If you are considering weapons of this nature when writing fiction, you’ll have a lot of thought on power source, heat loss and how long it takes to burn a hole. I do wonder if a flash-pulse could disrupt computer technology but that looks less glamorous. I really learnt a lot from this book and we still have a long way to go to be equal to Science Fiction usage.

Lasers that bend the laws of physics (science news).

Lasers that bend the laws of physics (science news).