When nuclear war destroys most of the planet, the Tibetan plateau is spared, sheltered by surrounding mountain ranges. A century later, it has become a place of superstition and legend, of bandits and warlords and, still eking out a living, poor villagers living their traditional lives. Casting a baleful glare over all of this is the prophecy that one more nuclear explosion, one more sun, will bring an end to everything. 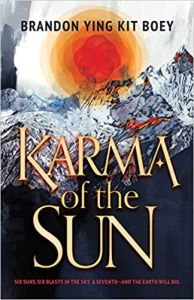 Brandon Ying Kit Boey presents us with a postapocalyptic tale full of all the ingredients you might expect from the genre, plus a culture and setting we’re perhaps less familiar with in general. Figures from Tibetan folklore inhabit the imagination of the locals and possibly inhabit reality, too. As the story progresses, it becomes less clear whether this is purely a science-fictional postapocalyptic tale or whether it’s a blend of magical realism too.

Karma is a concept perhaps familiar to many of us and is a philosophy that suffuses the lives of the Tibetan villagers. It is also the name of the book’s main character, a teenage shepherd who is viewed in an unfavourable light by most of the rest of the village after his father, a sherpa and foreigner to the area, abandoned them when Karma was young. The backstory to how and why this happened and why he is remembered so unfavourably is gradually explained throughout the novel, but all along it is evident that it has affected Karma’s entire young life.

The village lies precariously within the realm of the Eastern Army and its Minister, but close to the borderlands where bandits roam and occasionally raid. Refugees attempting to escape the Minister’s harsh regime try to flee to the lands beyond, where Karma’s father once went, following the legend of a better future for all their people, a future where their world is not destroyed in a final nuclear conflagration.

The young lad Karma travels from one difficulty to the next as he leaves his village in his father’s footsteps, searching for a mythical stone that will save the world. He gets involved with the Minister’s Easter Army, with wandering monks, border bandits, heroic rebels who help the refugees and violent rebels who are out for themselves.

At one point, it got a little confusing as to who all these groups were and what were their motivations and allegiances but, actually this just added to the realism of the setting, there’s no ‘good’ and ‘bad’, just a series of disparate groups all coping with the postapocalyptic world. Karma doesn’t know who to trust any more than we the readers do. It’s sometimes painfully frustrating and it feels like Karma is not getting anywhere, but he perseveres throughout.

The whole book takes an interesting and unusual look at what happens after the world is destroyed by nuclear war. There are no generals and scientists trying to save humanity, no grand plans involving underground silos, orbiting space stations or floating arks.

The peoples of the Tibetan plateau are spared by the geography of the land, the vast mountain ranges that sheltered them from the nuclear winds that swept the Earth. Their traditional lives have continued much as they were before and their philosophical outlook lends the story an air of fatalism that is both comforting and intriguing.