‘A Solemn Curfew And Other Dark Tales’ is a collection of weird short fiction by author Bev Allen with a bizarre, unsettling cover illustration by Mutartis Boswell. Allen has a taste for folk horror, the macabre and sharp, witty observation of modern domestic life. Here’s what you get. 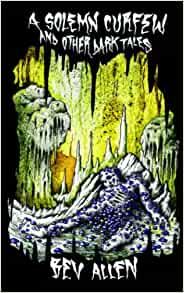 In ‘Cunning Water’, Brenda is a housewife who likes to keep the house pristine but her husband, Kevin, is an untidy brute who develops a passion for gardening. Mud! Worse still, he decides to have a pond. The opening story is full of wonderful dry humour and demonstrates the author’s fertile imagination. She shows it again in ‘Maud: A Garden Tale’ where a little girl sees creatures that no one else can see.

‘Hush-A-Bye’ is another tale of an unhappy marriage. Angela sleeps very badly, which makes her tired and irritable. Husband John, a clergyman, is the cause. He snores, loudly. The solution is amazing, especially for John.

Gedy is a very able cheesemaker with a secure position in the manor house in ‘Say “Cheese”’, set in an era when the lower orders knew their place, which was frequently under the upper class in more ways than one. Gedy strives to protect her assistant from the unwanted attentions of Master Ponton, a friend of the Earl. She has help from an unexpected quarter.

‘The Girl In The Water’ is told from the point of view of a predatory male who knows that his attentions are secretly sought after by the woman he craves or at least manages to convince himself that’s the case. It’s cleverly done but, here again, there’s more to the prey than meets the eye.

According to folklore, swans sing a beautiful song shortly before dying. In ‘Swansong’, we follow the career of young Gribble who lives in the fens and prefers the swamp to people. On hearing about the swansong, he decides to check the theory, starting with lesser creatures to see if they also sing a sweet song before death. With the possible exception of Paris Trout, Gribble is probably the most unattractive character I’ve ever encountered in fiction but the story was beautifully handled.

Lionel decided he must ‘find himself’, preferably with Sonia from accounts and leave Marjorie and all her weird shit. He does. She finds a new home but the next door neighbour is a busybody nuisance. The story features ‘Custard Creams And Elementals’ as per the title and is another odd delight with an unexpected conclusion.

Sensible Sylvia is murdered by her husband, Terry, in ‘No Sure Foundation’ so that he can set up house with Thea, the bimbo who lives across the road. Sylvia’s ghost hangs around, watches for a while, then tries to take action in another tale of domestic bliss gone wrong.

The title story, ‘A Solemn Curfew’ takes up the final third of the book. Quine works in the kitchens of Castle Gregganor, preparing exquisite vegetable side dishes for his Lordship but the hated head chef gets all the kudos for the meat main courses and occasional coins, too. Quine burns with jealousy and plots to get attention for his own work. Then a man comes along selling very special mushrooms. As usual, this goes in unexpected directions with the added bonus of several good recipe ideas.

‘A Solemn Curfew And Other Dark Tales’ is a quirky collection best taken in small bites, perhaps one story a day. A quirky black and white illustration by artist Autumn Barlow precedes each story. Author Bev Allen does not appear to be a great believer in the idea of happy cohabitation between men and women and the men always come off worse. The book is full of black humour, delightful prose and unexpected endings. Not twists in the tale exactly, more out of left field as the Americans say. But there’s nothing American here.

The book is very, very English, steeped in our folklore and modern suburban life. I think she makes it up as she goes along, which is often the best way. Certainly, there is nothing formulaic or boring. Highly recommended.