Contrary to your thoughts, ‘Psychology For Screenwriters’ is not to put scriptwriters on the psychiatrist’s couch and work out their job problems but for them to know a little more about the viewers’ mindset and story elements and motivations. The information here can apply to writing fiction in all its forms. 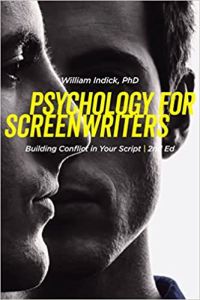 The first edition of this book came out 18 years ago and author Doctor William Indick decided it needed an update, showing an understanding of character motivations within the stories. I don’t know about you other writers out there reading this, but I don’t tend to lay on a couch and look too closely at the psychological profiles of my characters and how they react against each other. A lot of the time the characters are the players on the plot reacting to the events set up. That doesn’t mean I can’t learn something about this aspect so it’ll be interesting to see if I can defend my stance with what he presents. Even so, this review is going to be more reacting to what is said and for you to buy and read the book to cover the points, especially those I disagree with. There are lots where I don’t, so don’t think its all bad as you learn a lot about the famous psychologists.

With the long opening chapter on Sigmund Freud and Indick’s examples, including from our own genre, does make me think. As I said above, I doubt if the writers involved examined the psychology of the conflicts they were writing. More likely, they were focusing on the chemistry or rather the anti-chemistry between the various characters to propel the conflict. The fact that it succeeds doesn’t need psychology but emotional clout. If it was that easy a lot of psychologists would be writing fiction.

Indick’s thoughts on why people like villains than heroes is because they are less inhibited and we want to see how far they will go before they are stopped. In today’s comicbooks, the heroes are becoming less inhibited but often still behind that of the villains. Even so, it isn’t so much that they are too much goody-twoshoes but we are more aware that most people have to overcome over their failings to achieve something. We would tolerate an incompetent in a TV series but I doubt if we would stay close friends with any in real life for long. I do think examples should include stories that get it wrong and why or it just means most writers do get the psychology right.

I’ve never been sure about seeing weapons as phallic symbols. I mean, it’s a weapon for all sexes and I doubt if a blunt weapon would have much stopping power. Well, clubs do but their shape still fits the Freud categorisation. If anything, it tends to mute what they really do which is to maim or kill people not how big their sex organs are. I doubt if a woman firing a big gun is symbolising how big her vagina is. That really would be absurd.

I found myself correcting my comments when it comes to his examination of Erik Erikson and his examples include the odd films that get is wrong, although I doubt if many, if any, went to see ‘The Mothman Prophesies’ (2002) as a drama.

I’m learning a lot more about the various famous psychologists from this book which is increasing my background knowledge, although it would have been interesting to hear about psychologists who got it wrong and why. After all, writers like to learn from mistakes, too.

Carl Jung’s speciality is archetypes although I think I would question whether all people have mother and father-figures. I mean, what about orphans? Granted non-related people can fill such roles but not always suggesting more of a generalisation than a total accuracy. Then again, such generalisations apply to heroes and villains and progress today has been in not making either side totally good or bad as people are less keen on perfection and more on flawed characters doing the right thing.

Joseph Campbell’s depiction of ‘the hero’s journey’ plot is basic to so many films that I would consider it a safety blanket plot simply because people don’t get tired of it and its easy to mask. Even so, I do think there is a need for writers to play with the plot and see if they can find ways to twist it more.

It’s rather weird reading how Freud distanced himself from fellow psychologists who presented different ideas to himself. That could make a film all to itself when, as writers, we need different ways to do our writing or at least try to see if it gives a different technique. Anyway, another one is Alfred Adler who thinks a lot of it is down to inferior complexes. I agree it would certainly work with some kinds of villains and even used to turn normal people heroic. Whether it could work for all characters is more debatable. I know with films there is a need to present characters that can be instantly identifiable but people can be complex and needs more time to explore, especially in my own medium. You don’t necessarily have to lay down everything in the introduction but build up layers the more you use them.

Interestingly, Indick switches to genres for his final chapters and there’s an obvious fondness he has for westerns, American not spaghetti. He points out the various stereotypes throughout them and how as the genre faded out into modern day police mavericks and briefly into SF, although I’m not sure if ‘The Mandalorian’ TV series is the best example. The psychology of the loner sorting out a problem, reluctantly or otherwise, and then move on does work in any genre, with maybe the exception of romance.

There is a look at fantasy and SF, but mostly through two films by Guillermo Del Toro. Yes, he has touched on other genre films briefly but there is a feel that he could have chosen better examples. Other genres, including horror, espionage, thriller and romance don’t really get explored, although I suspect it might have increased the size of the book by a third.

Time for a deep analysis. Have I learnt anything from this book? Certainly, especially about psychologists other than Freud. It also does appear that even without scriptwriters probably not reading up on psychology, the majority appear to be getting it right in successful films. Does that suggest we get it right unconsciously? As I said above, we really need to see where we get it wrong and, more importantly, what bad myths we are propagating that need to be sorted out.

Certainly, this book needs some discussion to fully understand the implications but I would hesitate to totally adhere to it as a bible simply because humans are a but more complicated. When you see how much these famous psychiatrists differ from each other in what motivates people, then it still needs a composite than work solely out from one aspect. Don’t scratch the floor with the couch as you leave.