While ‘Joker: Original Motion Picture Soundtrack’ is billed as the original motion picture soundtrack, you need to be aware of what your buying here. It is the musical score of the movie composed by Hildur Guðnadóttir and does not include the many other songs played in the movie. You will have to go looking elsewhere for those. 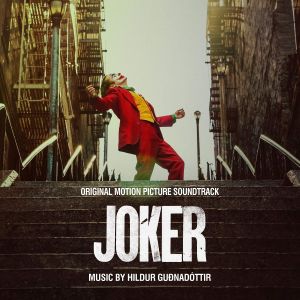 Now that we have covered what the CD is not, let’s talk about what it actually is. Guðnadóttir has opted for a classical style orchestra for this soundtrack, although there are occasionally some sound effects thrown in amongst the traditional strings, percussion and woodwind instruments. The accompanying material says that the composition ‘features the cello as the centerpiece of the score, leading string-based melodies played by a symphony orchestra of 90 musicians’.

As you can see from the track listing below most tracks are quite short. The two longest tracks are probably pivotal moments in the film and possibly Joker’s life.

All told we have 17 tracks giving a running time of only 37 minutes which seems a little short to me.

I should have said that the tone of the score is somewhere between sombre, melancholy and ominous depending on which track your listening to. One of the things you can’t say about it is ‘it’s a jolly little tune’. I have to say though that I thought it was very well done given the subject matter of the film.

That last sentence brings me to point out that to get the very best out of this soundtrack you really need to see the film. It will give you goosebumps. The ‘Subway’ track always makes me nervous. Perhaps that’s why the CD is short on running time, any longer could lead to a breakdown.

This is the first of Hildur Guðnadóttir’s work that I have actually listened to and I am very impressed. For any fan of the film who is not of a nervous disposition, then you really should treat yourself and get a copy. You can get the CD or Vinyl picture disc or even a coloured vinyl configuration whatever that is.