There are similarities between the fluid mechanics of pliable super-humans and that of shape-shifters but only as far as where some shape-shifters exaggerate their body shape. However, the common denominator is for them to manipulate their body mass in shape, colour and texture to resemble other people or, in some cases, objects.

There is a matter of how much mass they have to manipulate. For those who can resemble shapes larger than themselves, one has to consider them having higher flesh density or the objects being lighter than they should be. For those who only change appearance moderately, then any weight differences is slight. One would also presume that complete physical changes means such shape-shifters apparel is actually part of their flesh.

To take on absolute texture would also mean a control of their body temperature lest it doesn’t resemble fabric. Their ability to absorb and contort their flesh that way is truly startling enough to wonder if they were truly members of the species than sired them. 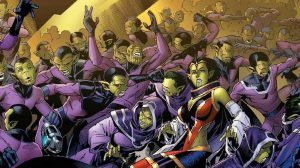 That isn’t to say that there aren’t whole species of shape-shifters like the DC Universe Durlans and Proteans and Marvel’s Skrulls races. Interestingly, the Skrulls were the results of a race experiment led by the Celestials. The Proteans a means to survive a catastrophe by the Llorn who colonised their planet for a while. If anything, the Durlans appear to be the only alien species that were not altered by alien intervention but considering the odds are against that, one would have to examine their pre-history. Even Gallifreyans ability to regenerate 13 times, a form of shape-shifting, was induced by artificial means and could be extended. 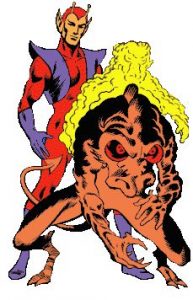 In the animal kingdom, various species survive evolutionary by masquerading as more dangerous, often poisonous, similar species, living off their reputations. Much of this is visual and flexible with species who have distinctive colours. Some species have something as simple as eye patterns on their backs or wings, enough to present them facing in a different direction. This is more a result of natural selection with the insects without such colouring being eaten or equally becoming regarded as separate species.

The total transformation within a species lies mostly with insects and amphibians but only in the capacity of growth. As adult or imago stage is mainly for reproduction than any further changes. Their early forms are as vulnerable to prey even amongst themselves, as cannibalism is rife.

However, the total temporarily transformation of shape to appear as someone else is totally outside of any species by natural selection. If these beings are born of a single species, then we are essentially talking a new species. Sudden changes can happen with mutations but this is probably the most radical and probably why there are so few, even amongst terrestrial super-humans.

For most human metamorphic shape-shifters, the humanoid shape stays the same, so the sensory organs stay within the head, so presumably there is little significant change in the skeleton or muscular tissue, although there is probably some redistribution of fatty tissue. Probably the most significant changes are with eye colour and possibly melanin. It is possible that the hair itself is not dead material which would explain why it can change in length and colour. The transformation between sexes is probably more superficial than actual. What sex these shape-shifters truly are remains to be seen.

The only Marvel Universe human shape-shifter known to have given birth is Raven Darkholm aka Mystique but her male sperm donor, Azazel, is also a mutant capable of making her pregnant. Her offspring, Kurt Wagner aka Nightcrawler only possesses her skin and eye colour but the rest of his appearance and powers owes more to his sire. Azazel’s other children, Nils Steiger aka Abyss and Marcus Skarr aka Kiwi Black, also share some of his abilities and none of their mothers which tends to suggest a genotype that could even overcome that of a shape-shifter. That is an issue for another time. How a shape-shifter can lose mass in the form of a baby presents such interesting challenges. The species mentioned above clearly shows it’s possible.

Although shape-shifters have rarely been under the microscope, one would suspect that they have more living tissue than usual. This doesn’t mean that they don’t discharge dead tissue in the same way as normal humans but it would be suspected they lose less. 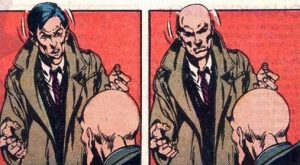 The cellular tissue would be best described as metamorphic, changing its appearance to whatever is desired without losing its function. In many respects, such a natural ability would have evolved or mutated as a survival mechanism. Those possessing this ability found it more convenient to pose as other people. Please be aware that the tissue might resemble the likeness copied but doesn’t necessarily it is the same.

Hair and nails would actually be alive rather than dead tissue. With the ex-Factor Three mutant, the Changeling, Charles Xavier helped cultivate his brain tissue to mimic the cells of his own brain that allowed the former to have limited telepathic and telekinetic abilities. One would surmise that had it been the real Xavier in that final confrontation with Grotesk, he would have stopped the sub-human with relative ease. The Changeling was already dying of cancer suggesting his body growth was out of his control.

In some respects, with the prevalence of mutations on super-human orientated Earths, it would be seen as inevitable that a mutant that radical would appear to be able to masquerade as one without any other abilities. However, understandably, these transformations are seen as a useful ability in its own right rather than to hide but to infiltrate. It would hardly be surprising if their body tissue was unstable. Equally, the ability to forever to regenerate their body tissue would also instil some level of extended life-span.

The likes of Logan aka Wolverine and Victor Creed aka Sabre-Tooth might not be shape-shifters but an intermediary suggesting that tissue repair might be one version of this or an earlier transitory mutation. Quite where single stage transformations like those who have been gamma-radiated like Bruce Banner and Jennifer Walters or even by cosmic rays like Benjamin Grimm aka the Thing fit into this is less certain as they draw in and lose extra mass in their transformation and less like shape-shifters. All it tends to suggest that the ability to transform shape might be a heredity trait just waiting for some form of intervention to manifest itself. We only see the successful mutations not the failures.

When shape-shifting transformations are seen under that light, we are seeing far more than not. Those who have total control of their appearance might well be the penultimate mutation with only those who acquire super-human powers being the next step. The nearest to that was probably Calvin Rankin aka the Mimic but his abilities instability shows this is not perfect. A pinnacle that is never likely to be reached.

The same also applies to the non-mutant variant Karl Lykos aka Sauron phasing between two forms when he absorbs organic energy. An extreme level of this lies with Ahmet Abdol aka The Living Pharaoh aka The Living Monolith aka The Living Planet where he absorbed sufficient cosmic rays to grow to…well, a small planet or moon-size. The investigation of energy to mass is more within the realms of Einstein’s equation: E=mc2 although not how it becomes precise matter necessitating further investigation.

Looking elsewhere, we need to consider the likes of were-people and vampires, all apparently one-phase shifters. These are caused by the passing of their infection giving them this ability which they have no control over. As such, one would have to consider the Patient Zero as possessing the true mutation.

In the meantime, shape-shifters should be considered a potential new species although its genotype isn’t widespread yet and limited by breeding. In a super-human world, the ability to masquerade as someone potentially dangerous until proven otherwise might provide the means to escape. Given that they can also masquerade as normal humans to escape might be the best demonstration of a survival mechanism in action.