Get your tickets ready to be clipped. Bribery is just about allowable if you find the right person. You’re going to take an adventure on the Trans-Siberian Express. Red eyes are optional.

Fangoria editor Chris Alexander explains in his introduction why the ‘Horror Express’ means so much to him. He reminds us that this is a Spanish production and how fragile Peter Cushing was after his wife died at the time.

In 1906, Professor Sir Alexander Saxton (actor Christopher Lee) leaves an exhibition into China that locates a frozen body and takes for exhibition. Well, he would if the Shanghai end of the railway service was more co-operative and remember his reservation. The help of the military helps a bit. Also on the train is zoologist Dr. Wells (actor Peter Cushing) and they do not get on. At least, not at the beginning.

Saxton believes the body to be the Missing Link. What he doesn’t know is it has thawed out and is very much alive and a perchance to kill. Both Saxton and Wells conduct autopsies and discover that its victims have literally had their brains wiped for information. There’s also a matter of some espionage on-board the train. What none of them know is that the creature’s mind can move from body to body and no one knowing who is who. The only time you can spot whoever is possessed is when the lights are down and its eyes show red. That and a hairy hand. 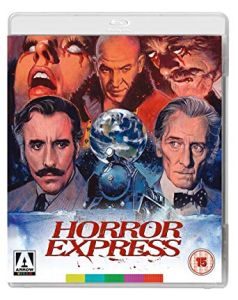 Although it is an obvious take on John Campbell’s 1938 story, ‘Who Goes There?’, it doesn’t follow the pattern of the 1951 film. Indeed, this alien can also talk. Still a menace though.

For those new to the film, it’s going to feel like a hidden classic. Not just because it’s got Christopher Lee and Peter Cushing in it but because, even with its age taken into account, its darn right creepy and no one is safe.

As I only get a look at the advance disk, the booklet isn’t available for review. When you have the two horror luminaries in Christopher Lee and Peter Cushing in a film, then you have to watch it.

The audio commentary is with writers Stephen Jones and Kim Newman. Although the film was made in 1972, it didn’t appear in the UK until 1974. The chatter covers a lot of other horror films and a sharing of each other’s knowledge.

‘Ticket To Die’ had scriptwriter Steve Haberman exploring over 8½ minutes the change in the world in the 1960s after the Vietnam War that allowed for more grittier horror films that made it easier for ‘Horror Express’ to be made. He also points out that although the film was popular in the UK, it was less so in its country of origin, Spain, and ran foul of poor distribution in the USA.

‘Night Train To Nowhere’ running at 15 minutes has actor Ted Newson discussing the film’s producer, Bernard Gordon, and why he left America to work in Spain. Gordon was also a scriptwriter often doing uncredited polishes on such films as ‘Day Of The Triffids’ (1963). He also explains how close this film was to John Campbell’s ‘Who Goes There?’ story which it is if you’re paying attention to the film.

‘Notes From the Black List’ is a 30 minute interview from 2005 with producer Bernard Gordon about filming in the McCarthy era when he was blacklisted. His first script was ‘Flesh And Fury’ (1952) starring Tony Curtis. He also explains that the McCarthyism was wrong because the Hollywood situation prevented communist meaning into scripts. Gordon was blacklisted because he wouldn’t give names, Gordon wrote scripts under pen-names, including some SF and horror films, before moving to Spain.

The ‘Telly And Me’ is an 8 minute interview with composer John Cacavas. The ‘Telly’ in question here is Telly Savalas who got him to compose the music for film, ‘Pancho Villa’ (1968) and they built up a friendship over the years which included Savalas’ singing career. With ‘Horror Express’, Cacavas’ fee had also to cover the cost of the orchestra. His friendship with Savalas also points out how generous the actor was amongst other things.

Finally, the 3 minute film trailer which, as was often the case back then, practically gives away the whole plot.

Considering the age of the film, there is a surprising amount of extras here. Be careful of any large crates when you take this train ride.