Thorn Bathu is touched by Mother War. She has dedicated her life to learning to fight so that she might avenge her father, who duelled the infamous Grom-gil-Gorm, Breaker of Swords, and lost. A terrible accident mars her last test, however, and she is branded murderer instead of warrior. Her sentence: death!

Brand is touched by Father Peace. He, too, has trained all his short life to become a warrior of Gettland. But the memory of his mother encourages him to do good, so he cannot stand by while an unjust sentence is passed. He speaks up on Thorn’s behalf. As a result, neither Thorn nor Brand may realise their dream of becoming a warrior of Gettland.

Father Yarvi has a plan for them. With the deep-cunning minister, Thorn and Brand will travel half the world in search of allies. Against them are the edicts of the High King and the machinations of his minister. The journey will serve as a better forge for the ambitions of both young warriors and a true test of Yarvi’s capabilities as minister.

‘Half The World’ is the second book in ‘The Shattered Sea’ trilogy by Joe Abercrombie. In the first book, ‘Half a King’, Yarvi vowed to regain a throne he didn’t want, succeeded and then gave it over to the rightful heir (read the book for more on that). His story continues here, a few years on, a few years matured. The theme of thwarted ambitions continues as well, with Thorn and Brand picking up the thread. Several members of Yarvi’s original crew play important parts and we meet a few new solid characters.

This isn’t just another book in another trilogy, however. While there is a greater story arc, ‘Half The World’ serves beautifully as the story of Thorn, the story of Thorn and Brand and even as the story of Brand, whose journey may seem less significant but is just as important. Being a warrior touched by peace is a lovely twist. I enjoyed Brand’s show of strength and fortitude and the manner in which he finally came into himself.

Thorn owns the novel, however. Her anger at everything is palpable, as is her need to prove herself, which drives her to not only pledge herself to Yarvi’s cause, but to learn all he and his companions have to teach. But she remains stolidly individual. Her own woman. This doesn’t always work in her favour, but it makes her so engaging to the reader. I laughed out loud at many of her observations. I cheered her successes and mourned her failures. I might have smacked her in several instances if she had obliged me my sticking her face out of the book.

The climactic scene toward the end, the fight that only she could fight, is one of the most riveting scenes I’ve ever read. Nothing could have torn the book from my hands from there to the end or most of the way through, for that matter. I eagerly await the final instalment in this trilogy, ‘Half A War’, due out July of this year.

‘The Shattered Sea’ novels are written for a young adult audience. The violence isn’t as violent and the sex isn’t as…sexy. But the tension is all there, as well as the gritty realism and careful and clever plotting. This is definitely an Abercrombie book and I found it as engrossing as others I have read. I would recommend this series to readers of all ages and especially for anyone who enjoys an epically absorbing fantasy experience. 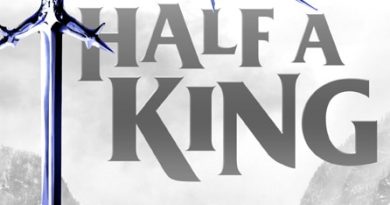 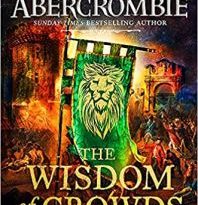 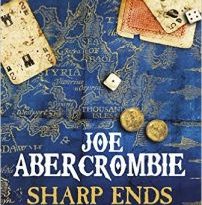