On a whim, I thought to look up Tom Savini’s ‘Grande Illusions’ book and came across this volume, ‘Grande Illusions: The Art And Technique Of Special Make-Up Effects Original Books I & II’ featuring both of them together, although I didn’t know the second one existed. I might not have seen many films Savini has done make-up on compared to the other special effects people but I do admire his craft and willingness to show how it’s done. I agree with his sentiments that there is still a place for physical special-effects next to CGI.

It’s also a multi-skill talent in sculpture, design, materials, moulding, etc. and a shame if people think it’s going to die out, which it shouldn’t by the way. You also need the soul of a conjuror to distract so the viewer thinks they see more than they actually do. Actors work better with some level of physicality to work against. Something that all CGI doesn’t always achieve. 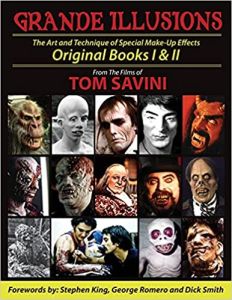 Seeing how Savini makes foam rubber, I don’t think you ought to use a mixer or an oven you would use for cooking food and that applies to all learner make-up artists. I also agree with Savini that you need to be careful with the chemicals because they can be toxic and need ventilating. I would say carbon tetrachloride is more carcinogenic than acetone.

What is fascinating about reading how Savini worked on the various films is the amount of preparation and thinking for what might be a few seconds on screen although I should point out these are long seconds because they stick in people’s memories. On some films, he’s also been asked to come up some sort on the set effects right away.

We all know the differences between a poor and a good special effects movie even if we don’t always know why. Although I doubt if many people have seen true carnage of badly hurt people and films showing it isn’t for delight but to show it isn’t pretty but to convince of the realism of the situation.

I did have a wry smile at Adrienne Barbeau being called ‘Adrian Barbeau’ but this is supposed to be the original text from the first book so an error like that had to be kept in.

It’s only after I finished book one that I had to remind myself that many of the films Savini discussed was some 40 years old and yet doesn’t feel dated. Special effects in films has a certain ageless quality and although the materials might change, the problems still remain, even when aided by CGI.

Oddly, I positively whizzed though Grande Illusions book 2. Only 100 pages of text and then two lots of colour sections and a lot more photos. Don’t forget, both of these books are showing you how to create special effects, although I suspect there’s also a good percentage of sales to people who just want to see how its done.

As Savini points out, this is an art that needs a lot of skills and you are always learning and your only CV is showing what you have done. It has to be a passion in your life to create physical make-up that can get you into an effects studio, learning as you go and hopefully into a prosperous career. Making monster make-up is an extension of this. Making the unreal look real is to live up to the expectation of the viewer as to what something looks like.

Like all conjuror’s tricks, even if you know how something is done, you tend to forget it when you’re caught up in a film and just admire skill.

If there’s anything missing from this pair of books, then I would have thought showing how to get the make-up off safely should have been covered. A satisfying read.