One of the greats passed away yesterday at the grand old age of 87 – award-winning SFF author Gene Wolfe, who produced The Book of the New Sun – a tetralogy exploring the adventures of Severian, a disgraced and exiled torturer forced to wander a strange far-future Earth (Urth) in an age after the Sun has dimmed and Earth is cooler (yes, it’s a Jack Vance Dying Earth sub-genre piece).

Gene deliberately mirrored Jesus with his character Severian, which he wrote from a first-person perspective of an unreliable narrator.

Gene’s works are said to have influenced many of today’s science fiction and fantasy writers, including creators like Stephen Hunt and his popular Jackelian series (also set in a distant far-future Earth), not to mention writers like Neil Gaiman and filmmakers such as Peter Jackson.

Gene’s Urth books include Shadow of the Torturer, The Claw of the Conciliator, The Sword of the Lictor, The Citadel of the Autarch, and The Urth of the New Sun.

Wolfe was born in New York City and fought in the Korean War, before working as an engineer (he invented the original Pringles potato chip machine – mmmm, thanks, Gene). Although first published in 1970, his writing really bloomed after he retired as an engineer in 1984 and he focused his spare time on his novels. His wife Rosemary, sadly pre-deceased him back in December 2013.

His wit and humanity will be sorely missed by everyone lucky enough to meet him at science fiction conventions and book signings.

Science fiction like a Wolfe: Gene Wolfe, the best SF author you never heard of (audio). 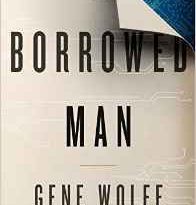 Science fiction like a Wolfe: Gene Wolfe, the best SF author you never heard of (audio).