‘Future Science Fiction Digest’ is still going (hooray!) and the third issue is out now. The non-fiction feature is an interesting interview with Dorothy Fontana of ‘Star Trek’ fame but I’ll focus on the fiction. There are two themes herein: the Moon and AI. There are also dogs. 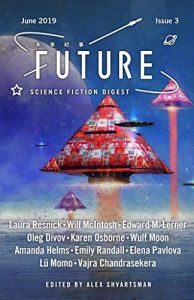 The Moon, AI and dog themes are beautifully combined in ‘Super-Duper Moongirl And The Amazing Moon Dawdler’ by Wulf Moon, a canine story set on our satellite. The Super-Duper Moongirl is Dixie, aged twelve, who wears red space keds and a silk cape to hide her tubes. Dixie is severely disabled, kept alive and mobile by Moon Dawdler, the latest Med Gen robodog and perfectly happy until an encounter with a grumpy astrobotanist leads to serious trouble. The Moon colony was realistically portrayed and the human-dog story would make a grown man cry.

Moon fever is gripping America again because the President has promised to get a man there in five years. This is the premise of ‘Astrobody For Sale Or Rent’ by Laura Resnick and she takes a satirical approach. Evidently, the first Moon landing was ‘fake news’ and this will be the real thing. A succession of clowns and charlatans are appointed as Administrator of NASA and the whole thing is jolly entertaining.

Some United Statesmen are disrespected in ‘Americans On The Moon’ by Oleg Divov but as he’s Russian, that’s to be expected. It’s an alternative history in which the USA has broken its economy by spending billions to fulfil Robert A. Heinlein’s wet dream of American missiles on the Moon. Horizon Moonbase 1 is just about complete when a Soviet Lunar Rover turns up on the site, a big one labelled ‘Explosive: Do Not Touch.’ How did it get there? Historical figures feature in the new setting and John McCain comes out of it well. The story is more anti-war than anti-American and good fun, too.

So to AIs and another dog in ‘Love, Death And Printed Burgers’ by Amanda Helms. Printichef is an automated machine that dispenses food and takes in money. It prints a variety of different flavoured foodstuff all manufactured from an organic base material. One customer came often and bought her dog. When the dog shows up alone, Printichef feels obliged to take care of it, which isn’t easy for a food dispensing AI with limited powers. Entertaining, clever and quite moving considering neither of the main characters is human.

We all get fed up with our jobs sometimes and X-20 Alpha-4 is fed up with his running the most secure prison in the galaxy. He wants to leave. Unfortunately, he’s a two-ton computer and has no spaceship. ‘Warden’s Dilemma’ by Emily Randall is narrated in the first person by X-20 Alpha-4, a sympathetic character. His plans get a boost when an alien kid comes in on the next shuttle. The green-skinned, four-armed Kenar is perfectly innocent, born en route to the prison. His criminal mother died, so he’s an orphan. He’s not a prisoner but must await the next shuttle to go back. Meanwhile… Clever stuff again.

There’s an AI playing detective in ‘The Satellites Of Damocles’ by Edward M. Lerner, an entertaining mystery narrated by an amiable computer personality. As with any good detective yarn, there are plenty of red herrings and a clever solution. The AI has no name but asks the client to call it Sherlock.

‘Foot Ball’ by Will McIntosh starts off as a brutal sports story in a post-Apocalyptic world where Liam faces a lifetime of slavery if his team, Kirkcaldy, can’t beat Dunblane in the big match that takes place on the territory between the two towns. In desperation, he takes the ball into the east forest where demons are supposed to dwell. Many odd elements are combined into a really gripping story. I loved it.

Not all AIs are nice. ‘Waking In The Cold And Dark’ by L? Momo (translated by Nathan Faries) is set on the interstellar colony ship Sunlight and starts with the AI narrator planning to kill ‘the third person’. Lights come on and one of the 832 sleeping compartments is activated. Mister Li Luo, a maintenance engineer, is awakened. He manages to avoid drowning in the fluid that held him but there’s plenty more peril ahead. The man versus machine adventure was enhanced by a rich background and some surprising revelations making this long story my favourite of a very good bunch.

‘Future Science Fiction Digest’ continues to please and I sincerely hope it continues to exist. New magazines often fall by the wayside and even the old classics are struggling. Hopefully, its use of translated material will expand the potential audience. It’s great to get a different slant from the Anglo-American view now and then. After all, what’s Science Fiction about if not different perspectives? As usual, I cannot recommend this highly enough. 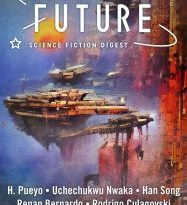 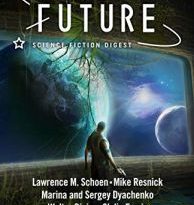 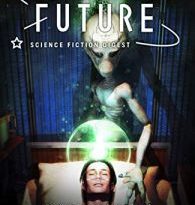