I did wonder when I selected Chris McNab’s book, ‘Samurai Warrior Operations Manual’, as to whether it fell without our remit. As I read, I saw pointers to the Minbari in ‘Babylon 5’ and, of course, the recent ‘Westworld’ TV series visited the time period. So, yeah, we should be interested in the real thing. People do examine different cultures as templates in fiction as well as general knowledge.

This also appears to be new ground for Haynes and it would be interesting to see whether they are interested in various cultures or warrior regimes. If they go on to look at ninjas, then we’ll know the initial answer. 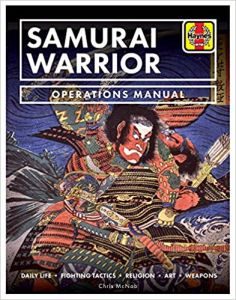 The samurai warriors lasted from the 10th-19th centuries and were the main military might in Japan. They were also beholden to various castes, lords and clans making for complex issues or fiefdom. Their history follows the Japanese history and how dynasties rely on them to become emperor of Japan. Their decline was also the rise of firearms which their armour had little defence against. Their opponents shot their horses first which reduced their speed into battle and more exposed.

Reading this book, it quickly becomes apparent how disciplined these warriors were. I find it rather amusing that they had to hide the fact that they read away from their servants. They had to continually show how tough they were, going to bed early and rising early, like 4am in the morning showed a disciplined life.

Their ornate uniforms are designed for protection and deflection. When you consider their main weapons are swords and long sticks, that should hardly be surprising. Be careful of their fans or gunsens, which when closed were a metal club. They were also expert archers, both on foot and horseback. If you thought that they were only men, then you’ll be surprised to discover that women samurai were prevalent in the 2nd-3rd centuries.

Reading about their regimented yomp (my choice of our military word for travelling with heavy equipment as there doesn’t appear to be a Japanese word for it) shows how sturdy these people were even before they went into battle. In case you were wondering about ninja activity, a quarter page notes them for ‘covert operations’ ie espionage than combat.

For obvious reasons you only see Japanese illustrations from the time period because they predate cameras. There are still pictures of their armour in museums, showing how long they last. Not unusual, the Japanese do play cosplay as samurai so shows an enduring taste in their own history. You can draw comparisons of samurai to British knights of old as they have their own squires and support staff from the same time period.

If there’s anything missing from this book then a more detailed account of their training and the daily regimes committed. Having said that, this book is a great learning experience and I certainly learnt a lot here. If Haynes are going to do more books exploring earlier warriors than I’m game.