Sam Peters’ 2017 debut novel ‘From Darkest Skies’ was one of those addictive books that I didn’t want to put down, filled as it was with mystery and intrigue, conspiracies and dangers. His follow-up novel, ‘From Distant Stars’, does not disappoint, taking us straight back into the action with agent Keon Rause, an investigator on the heavy gravity planet Magenta called in to investigate the death of a patient and three Fleet officers in Mercy Hospital. Right from the start there is evidence of conspiracy and cover-ups, illegal technology in the form of a military grade shell assassin (with the same meaning as in ‘Ghost In The Shell’) and past mysteries resurfacing. 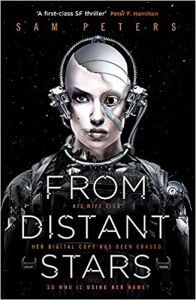 Sam Peters moves the action along swiftly as multiple forms of communication overlap so that characters are talking and simultaneously conversing by text while Agent Rause splits up his team to follow up on different leads.

The use of future technology to carry out their investigation is nicely balanced by even more complex technological ways of avoiding detection, giving the case a realistic air of making slow and steady progress through layers if complication and extraneous and irrelevant clues. At times, it feels like a solid police procedural such as CSI, but there is always a hint of danger and astonishment in the background.

To add an extra layer of intrigue, the colony of Magenta was founded a hundred and fifty years earlier when an inscrutable alien race known only as the Masters destroyed half of Earth and transplanted millions of humans to several other planets. The mystery of who they were and what they wanted is always in the background and has particularly caught the public imagination with the discovery of what could be one of their lost ships buried under the polar ice cap.

Plenty of theories and cranks provide possible red herrings for the investigation as the murders and the polar expedition seem to be linked. All the while, the AI avatar of Keon’s dead wife is helping or possibly hindering him. The plethora of over-lapping ingredients make this a truly gripping novel with a mystery complex enough to keep me guessing to the end.

The book is written with a sense of pace and clear, breezy prose that keeps things moving nicely. Sam Peters manages to pack in plenty of interesting concepts and sub-plots without bogging the plot down and explains numerous concepts satisfactorily without appearing to engage in lengthy explanations.

The fact that it’s the second book helps with this, of course, as there’s already a background in place and this book builds nicely on ideas and concepts that were only briefly explored in the first volume. It’s shaping up to be an intriguing setting and there’s still plenty of mystery left to be explored in future books. 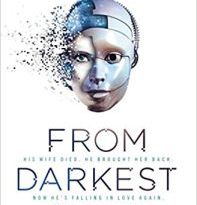